U.S. President Barack Obama's chances for re-election in 2012 are increasingly tied to the fate of the U.S. economy, poll results show.

Meanwhile, presumptive Republican nominee Mitt Romney hasn't gotten as much benefit from the weak economy as one would expect - a sign of his inability to connect with voters.

The past month has not been kind to the U.S. economy - or President Obama's standing in the polls.

The barrage of bad news has included:

"The economy is going through a rough patch, and that more than anything is going to determine President Obama's future," said Ipsos pollster Chris Jackson in comments on a Reuters/Ipsos poll taken in early June. "People's unhappiness with the economy carries over pretty directly to the president's numbers, and we see those weakening."

In that poll, President Obama's job approval rating slipped from 50% in May to 47%, and those saying the country is on the wrong track jumped 6 points to 68%.

Although President Obama's argument that he inherited economic problems too severe to fix in three years resonates with his liberal base, the moderates and independents likely to decide who sits in the Oval Office next year aren't so sure.

In that Reuters poll, the president's approval rating among independent voters plunged from 48% to 35%. And that was just over one month.

"Independents are especially susceptible to economic pressures, which is why we see them bouncing all over the place in their approval of the president," Jackson said. "The finding that he is not doing that well with them this month is something for Obama to worry about."

But the polls show Romney has reason to worry as well. Given the sorry state of the U.S. economy, one would expect Mitt Romney to be leading the president.

Yet Romney remains an underdog in the Election 2012 race.

For one thing, voters simply like President Obama better than Romney.

A June poll by the Pew Research Center showed that only 41% of voters view Romney favorably, compared to 50% for President Obama. And when asked who better connects with ordinary Americans, 59% pick the president; just 28% pick Romney. 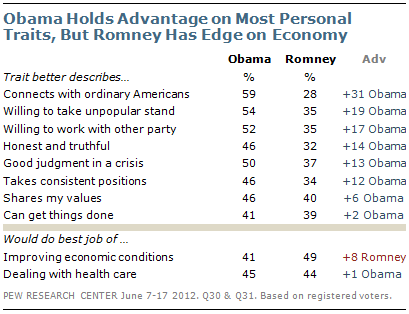 In fact, voters rank President Obama well ahead of Romney in categories ranging from "Good judgment in a crisis" to "Willing to take an unpopular stand." Romney only prevails when voters are asked who would do a better job of improving the economy (see chart).

That means if the U.S. economy starts to show any signs of life before November, voters will likely stick with President Obama.

And while a tanking economy could deliver the White House to Romney, a safer plan would be to figure out how to better connect with voters.

Otherwise, Romney's strategy hinges on using the lousy economy as a political truncheon, which plays right into the "insensitive rich guy" image that Romney needs to shed.

One thing that's clear from the polls is that voters consider economic issues by far the most important in the Election 2012 race.

In the Pew poll, jobs was named the top concern by 35% of the respondents. Coming in second was the federal budget deficit at 23%. Healthcare was third (19%), Social Security fourth (11%) and immigration fifth (5%).

Voters also hold a very bleak view of the overall U.S. economy. In a recent Associated Press-Gfk poll, two out of three described the economy as "poor."

That should be an opportunity for both candidates to win votes by selling their visions to fix the economy.

Admittedly that's a bit more of a challenge for an incumbent president who has struggled to do just that for more than three years. But as a Republican, Romney is saddled with the legacy of President George W. Bush, under whom the economic crisis began.

What's more, after years of partisan bickering and inaction in Washington, many Americans are skeptical either man can fix the U.S. economy.

"I think we are on the wrong track," Doss Comer, an independent voter who lives in Jacksonville, NC, told the Associated Press. "We're not getting anywhere. We're not growing. The unemployment rate just spiked up again."

But he went on: "I don't trust Romney because of what he's doing. He's telling his business experience, that he was an investor in business. ... I don't think he has the right background any more than Obama."