I recently spoke at FreedomFest in Vegas along with the world's best and brightest minds, such as Steve Forbes, Senator Rand Paul, and Whole Foods CEO John Mackey.
I discussed the growing global demand for resources and gold to a crowd of 2,000.

Half of the group was attending for the first time, which demonstrates to me a growing curiosity to learn about macro trends shaping the world and affecting our investments.

Among investors these days, coming across a fellow commodity bull is about as rare as finding a positive story in the media, especially when you look at the results of metals and natural resources during the first half of 2012.

Only four commodities on our periodic table pulled off a positive return.

A Clear Tipping Point for Resources

Fears of slowing global growth and how it will affect commodities have caused many investors to dig their heels in the ground and resist owning natural resources. Perpetuating this negative investor sentiment is the constant 24/7 news cycle punctuated with pessimism.

During a natural resources conference, Jeremy Grantham of GMO pounded the table for an investment in resources, but you wouldn't know it by reading the headline of the CNN piece that covered the topic.

In its article called, "Our planet will truly be toast," CNN discussed Grantham's comments on a global commodities shortage, saying he was "bearish on human resources...but bullish on natural resources investments."

His argument focused on the swelling population in China, and the fact that the world had experienced a "great paradigm shift" around 2000, when commodity prices, which were negative for decades, "abruptly reversed course." He told the crowd, "in the long run, you can't afford to miss this opportunity." We agree. 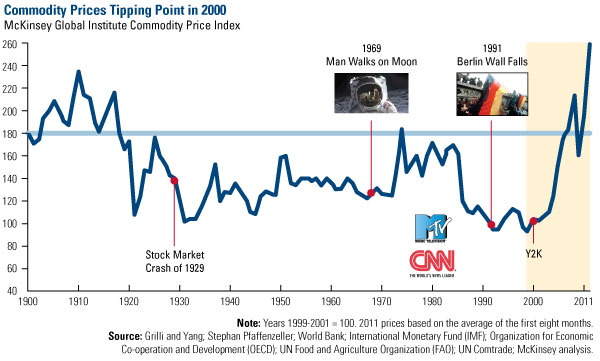 As you can see on McKinsey & Company's chart above, the past decade shows a clear tipping point for resources.

In 2000, I became the chief investment officer of U.S. Global Investors at a time when no one wanted to touch resources. We recognized the significance of China and Eastern Europe ushering in free markets, believing this to be a positive change, with emerging markets as big beneficiaries of this massive shift.

I like to use the metaphor of an ice cube to explain how new equilibriums can have significant effects. We all naturally understand what happens when you take ice out of the freezer.

It changes form, from solid to liquid, but it's still made up of hydrogen and oxygen.

A change in something the size of an ice cube does not have much impact-it'll only leave a puddle of water on your counter. Instead, picture a glacier unthawing and how this huge chunk of ice drastically affects the world's ocean level.

Or take H20 in steam form. At 211 degrees, water is way too hot to dip a finger, but it's still one degree below the boiling point. As explained in the motivational book, 212: The Extra Degree, "Applying one extra degree of temperature to water means the difference between something that is simply very hot and something that generates enough force to power a machine."

The significance of the changes in states of matter-whether it's a chunk of melting ice or a steam engine-is that there is a tipping point that significantly alters the dynamics.

It's what Grantham called "the great paradigm shift" and they have equally dramatic effects on how we invest in commodities, change opportunities and adjust for risk.

Smart investors look past the rampant negativity in the media to see these patterns and anomalies to determine where the opportunities and threats lie.

Americans can see how shale gas technology has changed the dynamics of oil and natural gas. The chart from the U.S. Energy Information Administration's Annual Energy Outlook 2012 shows how consumption of petroleum and other liquids in the U.S. have significantly changed while production has been rising. Consumption rose throughout the 1980s until about 2005, when it dropped off.

Meanwhile domestic production was declining. Between 2005 and 2010, a significant change happened: consumption dropped, then leveled off and the rate of production shifted higher. The EIA estimates that because of these shifts, net imports will decrease to 36 percent in 2035 from about 49 percent today. 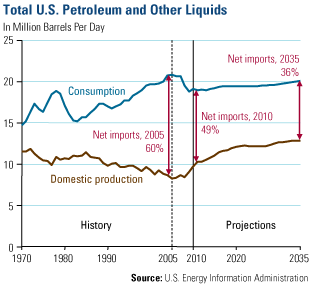 As Brian Hicks, a portfolio manager of the Global Resources Fund (PSPFX) pointed out in a Smart Money article, when oil prices rise, people put more resources into getting the commodity out of the ground. He says, before the oil-price boom, these reserves would have been unprofitable, "now they're anchoring "a gold rush.'"

Similar to higher production in the U.S., Iraq production is on the rise, Libya supply is climbing and demand remains tepid.

Morgan Stanley Commodity Research believes that the "path of least resistance for oil is down."

This is why diversification among natural resources is vital. Because there's always an ebb and flow of commodities, both seasonal and cyclical, it's important to anticipate these global trends to know how to participate.

The key is to adapt to external elements like the way oil production adapts to excess supply. Usually the easy answer, such as staying on the sidelines, isn't the best answer, though.

Take a look at today's yield on a 10-year Treasury-it's 1.49%. Meanwhile, inflation is at 1.7%. This means that after you factor in what you've lost from the destructive force of inflation, you're left with a negative return.

Instead of being stuck with this potentially losing proposition, we believe there are plenty of opportunities out there.

In a previous blog, I discussed dividend-paying resources stocks: Of the companies in the S&P 500 Index, materials pay an average yield of 2.3%, utilities pay an annual rate of 4.1%, and energy stocks pay a dividend yield of 2.2%.

And if you need to park some money for a few years, you may have noticed that 3-year certificate of deposits offered at a bank are yielding about 1.34 to 1.42%. These CDs lock up your cash for three years and generally come with a penalty for early withdrawal.

There may be better-yielding alternatives out there for those that can take on some risk as they seek higher returns.

For example, U.S. Global Investors' Near-Term Tax Free Fund (MUTF: NEARX) had a higher 30-day SEC yield on a tax-equivalent basis based on a 35% tax rate as of June 30, 2012. Also, the fund invests in bonds that have an average maturity of just over 3 years, which is about the same holding period as a 3-year CD.

While the fund is not FDIC insured, it does provide the flexibility of daily liquidity that comes with a mutual fund.

I've rarely been more excited to talk positively about how investors can take advantage of the anomalies and trends in the market.

I'll be presenting these ideas at the Agora Financial Investment Symposium in Vancouver. Hope to see you there!

A response to the GLPYY recommendation of July 19th.

I enjoy and look forward to every Private Briefing, but I cannot believe your recommendation of GLPYY, a stock that has traded and average of 374 US shares in the past 90 days.

Can you please explain this?

In view of expectation of QE3 later this year, perhaps as early as August 1st, it would seem that there should be a mad rush into commodities at this time. If QE3 happens at the Jackson Hole meeting where the QE2 occured last year then how would you best position yourself in either commodities or in positions most likely to profit from a weakening dollar as well as what international positions would do best. I believe EWG or GERJ capitalize on Germany having a substantial export advantage upon the weakening of the euro or if the euro would reach parity with the dollar would be two of the best plays if one would expect the euro to push to parity with the dollar upon the dollar weakening substantially based on the magnitude of QE3. I also like the energy sector in light of Iran heating up and failure to schedule meetings past August 3rd. Where would you get the biggest bang for the buck on energy were this conflict to turn hostile and war to erupt?
J.Mack