Anyone investing in gold should recall that before the financial crisis in 2008 central banks were dumping the yellow metal - when it was trading for less than half of where gold prices are today.

But that certainly has changed in recent years.

In 2012, the world's central banks added the most gold to their reserves since 1964. Net official gold purchases added up to 536 metric tons, a gain of 17.4% from the previous year according to a report from Thomson Reuters GFMS. The estimate from the World Gold Council for such purchases is similar at 500 metric tons.

Central banks are forecast by GFMS to purchase 280 metric tons in the first half of 2013 alone.

That's good news for anyone investing in gold.

While the leaders in gold reserves remain the developed economies - the United States at 8,133.5 tons, Germany at 3,391.3, Italy at 2,451.8 for the Top Three - the recent move into the precious metal has been led by the central banks of emerging market nations.

The GFMS report stated, "With continued monetary loosening in advanced economies, demand for gold as a reserve asset from developing countries will remain strong in 2013."

To date, the move into gold was led by Asian central banks. Back in 2009, China (which now holds 1,054.1 tons) first reported it was accumulating gold. Meanwhile across the border in India (557.7 tons), the central bank bought 200 tons of the shiny metal from the International Monetary Fund in 2009.

Over the past few years, other central banks in the region including Russia, South Korea, Thailand and others have bought gold. Russia is now 7th on the Top Ten list at 934.9 tons.

This led the Financial Times to say the purchases are "making Asian central banks the main driver of official sector purchasing." 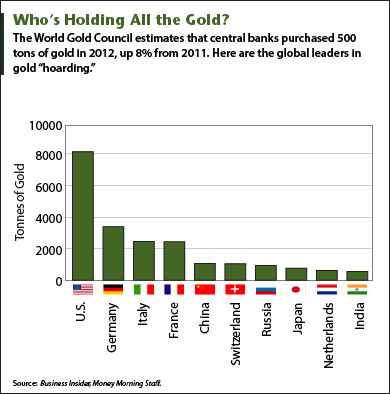 But Asian central banks are not alone. Their fellow emerging market central bankers in Latin America have also been stocking up on gold over the past two years.

According to the Financial Times, gold still accounts for a mere 0.8% of Brazil's total reserves. The country's reserves are estimated to be nearly $380 billion.

Gold fever seems to be spreading to the rest of Latin America as well. It is reported that last year Paraguay bought 7.5 tons of gold, Colombia 2.3 tons and Argentina 7 tons. It would not be surprising to see other nations such as Chile and Peru join the gold buying party soon.

These new buyers from Latin America may push 'official sector' demand for gold this year above the estimate by GFMS and others.

With the Bank of Japan now jumping into the money printing pool with the U.S. Federal Reserve and the European Central Bank (ECB), conditions remain ripe for continued purchases by emerging market central banks and individual investors as they all endeavor to retain the purchasing power of their money.

Philip Klapwijk, global head of metals analytics at Thomson Reuters GFMS, said "Policies of ultra-low interest rates across the Western economies will persist in 2013. This will continue to support investor interest in gold."

Klapwijk anticipates gold prices to move back into the $1,800 an ounce range. The London Bullion Metals Association recently said that gold could hit $1,900 an ounce this year.

Money Morning's Global Resources Specialist, Peter Krauth, believes it is quite likely gold will see $2,200 an ounce in 2013. The reasons he cites includes the aforementioned money printing and central bank buying of gold along with the supply/demand fundamentals.

For investors who want to bet on higher prices, there are a number of ways to invest into gold.

These include buying actual physical gold in the form of bullion or coins. Or if an investor is more comfortable with stock market-type investments, there are several exchange traded funds to consider.

The largest gold-backed ETF is the SPDR Gold Trust (NYSE: GLD). Two other popular gold ETFs are the ETFS Gold Trust (NYSE: SGOL) and the Sprott Physical Gold Trust (NYSE: PHYS). SGOL is backed by physical gold held in London while PHYS actually allows investors to convert their holdings into gold bullion if they wish.

Yes, and China has a lot more than that 1,000 tons it "officially" holds. They've been accumulating with focused intention and will probably announce a total at least double that amount fairly soon…maybe next year. But why say anything when the Fed is manipulating prices lower and you can load up at bargain prices? Part of a deal? Just keep buying on the QT.

Always improves my day when I see your name posted at the end of one of our reports. You are a valued member of our readership community.

Happy New Year to you … may 2013 bring you happiness, health and prosperity ..

Bruce … some valid points. I think we've hit on some of these in other reports, and it's not possible to cover every bit of real estate in every piece.

But, as I said to Fallingman above, when I see your name attached to a post, I am confident that you've put much thought into what you right and that the points you raise are always interesting and thought-provoking as well.

It's nice to have an audience of smart folks who raise intriguing points … makes this job fun.

Nice hearing from you.

It would be highly interesting to see the per capita breakdown of the gold holdings of those countries, and accessorily, if available, whereabout how much of it is stored for each country.

This isn't exactly what you're looking for, but might give you an idea about how much some of the biggest "hoarders" hold.

Hi Bill,
Just a question. I am a new gold investor (Dynamic Funds). Ever since June 2011 my RRSP has plummetted. Do I just jump ship now and count myself lucky that I only lost 1/3 of my investment?
Signed, Apoplectic

This is a win-win situation for all gold investors, as always. Even, if a first-time investor is willing to add gold to his investment portfolio, he should begin with it at the earliest only after researching the things since the gold prices are increasing day-by-day…