Ahhh... the warm breeze I'm feeling. I can't figure out where it's coming from.

Oh, there it is. It's the air of confidence wafting over me knowing everything's as it should be with our too-big-to-fail banks, and that they're not going anywhere.

That the big banks are safe, that they have a handle on their assets and liabilities, and that the U.S. Federal Reserve's stress tests are a warm blanket that lets us all sleep well at night.

In fact, I'm going to sleep like a baby tonight... How about you?

No, it doesn't bother me like a cold sideways rain that there are mistakes here and there.

That small banks like Bank of America (NYSE: BAC), only the nation's largest retail bank, might not see, for something like six years, a minor miscalculation in some valuation book that tallies the pluses and minuses of holding plain-vanilla structured bond thingies. 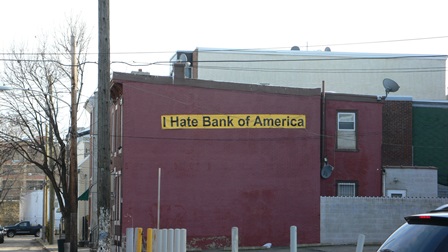 No, it doesn't bother me that a non-executive, non-senior regular old employee caught the $4 billion mistake - I mean miscalculation - in April as the bank was preparing yet another routine quarterly financial report.

It should bother all of us that these poor banks have to file all these nuisance quarterly reports when one annual report would save them from so many superfluous prying eyes, save so much wasted time and money.

No, it doesn't bother me that the head of Bank of America's board of director's five-member audit committee is Sharon L. Allen, the former chairwoman of a little accounting firm called Deloitte.

For goodness sake, how in this GAAPing world of accounting prestidigitation is she supposed to figure this accounting stuff out?

She's a board member, not an employee, for heaven's sake.

No, it doesn't bother me either that Ms. Allen and the entire audit committee and BofA's weak-ass auditors PricewaterhouseCoopers were just reelected the other day by shareholder lemmings, and that silly little pay packages of top executives were also approved.

Come on, these perps (sorry, I mean peeps) work hard for their money. Do you know how hard it is to be a member of five golf clubs?

But here - this here's what bothers me the LEAST.