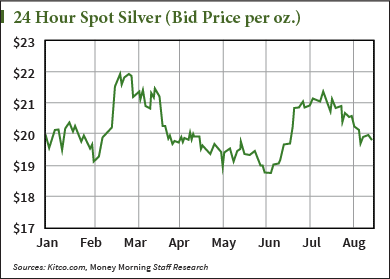 Silver prices this week have been slow and steady, continuing an uneventful August during which the white metal has traded in a narrow range.

As of market close yesterday, the price of New York spot silver on the COMEX was around $19.86 an ounce, down a slight 0.3% on the week. Silver futures for September delivery, the most actively traded contract month, were down just $0.03 at the close of market to $19.91.

The iShares Silver Trust (NYSE Arca: SLV), an exchange-traded fund (ETF) that holds physical silver bullion in JPMorgan Chase & Co. (NYSE: JPM) vaults in London and New York, is down $0.09 at $19.10 as of yesterday's close. The ETFS Physical Shares Trust (NYSE Arca: SIVR), a close alternative to the premier silver fund, SLV, was down $0.08 on the week to $19.61.

In early morning trading today (Friday), spot silver took a dive and traded as low as $19.45. These are lows that haven't been seen since silver bottomed out in late May moving into June, just before a six-week rally that took silver on a ride from below $19 an ounce to around $21.50.

However, while silver will recoup from its recently slow trading in July, its next rally isn't quite ready to take off.

That's why in late May, as speculators were taking out a record number of short contracts, prices traded as low as $18.76. That came at a time when silver was plunging into a three-month long bear session.

Fortunately, there is a breaking point.