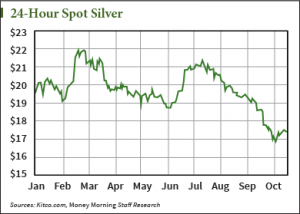 Silver prices this week have fallen slightly, but there are encouraging signs for the white metal moving forward.

After almost three months of freefall, during which time silver prices fell 21.4% and touched off four-year lows, prices finally reversed direction and traded up last week. It had fallen 11 of the 12 weeks prior and had been down for five consecutive weeks.

So what's fueling this reversal?

There are a number of factors helping contribute to silver's turnaround.

The most obvious is the pessimism sweeping through the broader markets, on Ebola fears and concerns of a market correction.

The Dow Jones Industrial Average has erased all its gains on the year, and at yesterday's close was down 7.2% from its peak, closing at 16117.24. A market correction is often defined as a 10% decline.

Similarly the S&P 500 has been down almost 8% and is getting very close to erasing all its gains on the year.

Alternative investments, such as precious metals, tend to attract interest from investors when markets panic. It's looked on as a hedging vehicle that retains value against falling equities.

It also is looked on to protect against a weakening dollar, which has become the case in the last two weeks as well.

The third factor pushing up silver prices was a reversal in the silver futures market of short-side speculation.

On Sept. 30, speculators were short on 256.7 million ounces of silver, the largest volume of short contracts on the white metal on record, according to data from the U.S. Commodity Futures Trading Commission.

But as prices inched up and silver traded at four-year lows, traders going short began to take profits and cover their positions by buying long. In the week to follow, short sellers liquidated their positions to the tune of 12.3 million ounces, providing more buyers to help buoy prices on the week.

Silver also received a boost from institutional investors. Silver exchange-traded funds (ETFs) added 12.2 million ounces of physical silver to their holdings in September, the biggest monthly increases since August 2013, according to Thomson Reuters.

With all these factors helping push silver up, the question now is: Why are silver prices flat this week?

Comfortable false faith in pumped up stocks and the continuation of paper printing. Trend could actually continue up to another 2 years at which time silver will hit $100. The next president will see the bubble burst.

Greetings, I'd like to be included on your Money Morning newsletter list of recipients. I have a growing interest in the Silver market.
Thanks.