But their story is no less exciting. And the metals remain a fundamentally critical part of the global economic and strategic landscape.

Indeed, gold and silver took roller coaster-like rides throughout the year, both screeching towards their respective price lows before bouncing, albeit cautiously, ahead.

With the benefit of hindsight and the value of foresight, it's time to look at how gold and silver acted in 2014, and what we can do to profit in 2015.

Let's start with the yellow metal…

Gold Will Bounce Back Quickly 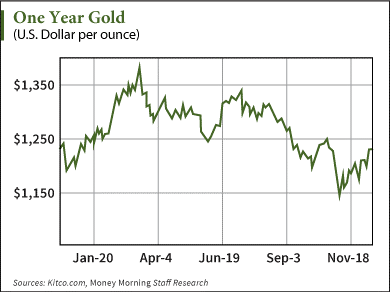 The U.S. dollar began a strong climb from July onwards, likely in anticipation of the Fed ending its asset purchase program in October, as it ultimately did.

And then it embarked on a new rise…

One of the biggest positives is how gold held up over the recent months: as oil prices plunged 27% from early November into mid-December, gold climbed by 7%.

Not even news of the defeat of the Swiss Gold referendum held it back.

Then India, battling for top gold consumer spot with China, relaxed some of its import restrictions on gold, making it more attractive during the traditional wedding season, and helping to push its price higher.

Chinese gold demand remains robust as well, and is expected to grow substantially again in 2015.

Will 2014 eventually prove to define the bottom in gold?

The odds of that are improving. Even if the U.S. dollar continues to show relative strength, I believe the fundamentals are in place for gold to reach back into the $1,400 to $1,500 range by this time next year.

Silver Will Take Longer – but It Will Be Worth the Wait

Silver's had it rougher than gold which, thanks to its nature, is to be expected.

While gold is off about 1% so far this year, silver's given up about 12% – way more than it typically would.

But not everyone is selling…

Gold will go nowhere as long as JP Morgan etc. are allowed to sell millions of ounces that they do not have to drive the price down so that they can pocket the difference. Unless margin requirements are instituted this pick pocketing will go on for ever as they are allowed to control the market.

Robert in Vancouver
Reply to  Ray

I agree with Ray. And I would add that gold will not go up unless the US Dollar goes down.

But since most people outside of the USA consider the US Dollar more valuable than gold and everything else in the world, the US Dollar is not going down.

The US gov't can carry on printing all the Dollars they want without limit, and the rest of the world will keep bidding the Dollar's value up. It's absolutely crazy, but that's how it is.

Completely agree, price manipulation is rampent, only once the balance of physical tips to the east can the situation possibly change.

so who can change that? howabout a comment from Peter?

If both China and India are buying large quantities of gold, should the price support not be greater? In your opinion, just how much is the gold (and silver) market being manipulated by the world bankers?

I concur Ray. See my additional comment beyond. apple65

When looking at all of the "world" currenies, the USD is probably the "best looking horse" in the GLUE FACTORY!

In another article (not sure date written) you said silver will hit $40 in 2014 $60 in 2015 sure different predictions now.I'm confused
And this article really is not saying much like 15% to 20% increase that could happen in 3 months given the volatility of gold and silver.

I also agree with Ray.Peter $20.00 – $25.00 an oz for silver is a far cry from what you guys stated six month ago. Until something is done to stop gangster bankers silver may never show its true value, its a crap shoot

what a crock! gold will be below $1000 shortly and who knows how low after. the bull market is dead for at least another 6mos. STAY AWAY from miners…for now.

I agree with Ray and wish I didn't considering I own fairly large gold holdings. As long as there is no audit of USA physical gold holdings, as long as the world salivates for US dollars, and as long as central and investment bankers continue to manipulate the price gold is screwed. No doubt when the current fake financial system melts down, as it will, precious metals will take off. I hope I'm still around at that future time.

Hey Rod I'm in the process of buying a gold mine in the Yukon Territory and I am hoping that I can get the funds to buy the mine. I believe that gold will go up to so wish me luck in my indever I just hope that analysis are right about gold could hit 2000.00 an oz

I agree with Rod. The financial system melt down, and I hope I am still around to cash in my Gold and Silver.

I agree with Ray that there is a tremendous amount of manipulation going on, not only in precious metals but also in currencies and the stock markets. The Federal Reserve does not like gold because its ascent is a bad reflection on its monetary policies. So in another 1 of its many unauthorized moves its sold 1,000 tonnes of gold in the futures market. The US government condones JP Morgan's short because it has been the custodian of gold from many countries, Germany, etc. These countries are clamoring for a return of their gold but the gold has been leased out. So it is in the interest of the US to drive gold down so that it can satisfy demands for repatriation. Meanwhile, China is earnestly stockpiling all gold it can get its hands on. So wealth is moving from the West to the East.

So how does the little dawg play gold and silver now
Buy physical metal or ETF or stock like SLW??

Well one thing is certain most of the developed world knows most of gold ever mined is still around ,however with technology jumping forward and the need for silver in certain electronics will always maintain demand. You cannot eat Gold, Silver, Or paper currency. So people are now realizing Gold is just a pretty metal and is just actually needed for few things today (other than a few circuit boards) jewelry is just bling. Real people who have the knowledge of GOD and Family know There are far more important things in life such as spending the short time we are here on earth with our children, grandchildren, and doing things with them!!!! When or where do you draw the line between creating wealth or creating family bonds and memorys??

Everybody knows that God is more important than gold. How can you possibly make this comparison. You can't eat gold and you can't eat God. But what you can to is donate your gold to a worthy charity.