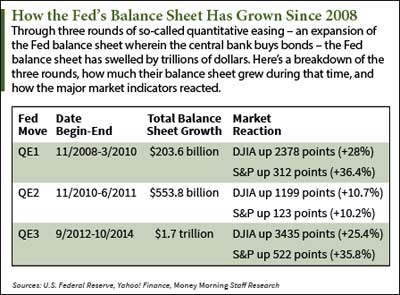 It's only been a month since the last meeting convened. But a lot has changed.

The currency markets have been shaken. The European Central Bank has announced its own quantitative easing program, just months after the Fed ended QE3. The Swiss National Bank unpegged its currency from the euro.

But as we've said before, you're better off not parsing the Fed's language with the release of every policy statement. This FOMC meeting today is no different, despite its timing.

2015 will see two divergent paths for monetary policy. But both paths are going to intersect. Neither central bank has all the answers.

Here's how this QE story will play out, and why today's FOMC meeting will just be noise in a much more troubling outlook for central banking...

The FOMC meeting today will be rife with the same vague statements it always has been. Although the Fed meeting could always address the biggest topic it never seems to acknowledge: QE failure.

The main problem with Fed QE  is that it doesn't achieve what it aims to achieve. It doesn't grow the economy because it doesn't actually trigger spending. It can provide banks with funds to lend, but it can't encourage debt-ridden consumers and businesses to take on more borrowing.

You see, Fed QE tried to achieve many goals. The most obvious of which was to push down yields on interest-bearing debt. This forced investors into stocks.

The accompanying asset inflation bolstered stocks. It aimed to get consumers to spend. This was based on the flawed assumption that a booming market means a booming economy through a wealth effect.

But consumers and business haven't been spending. They are deleveraging - paying down debts. They're also building up savings. This is even as we're years removed from the financial crisis.

When so many consumers are saving, U.S. banks become flush with unborrowed funds. This is where the phenomenon of what economist Richard Koo calls a "balance sheet recession" comes into play.

There's one major flaw. Even at low interest rates, private sector borrowers aren't borrowing. They're still deleveraging. And as long as there's no lending activity in the private sector, demand is going to stay weak.

While government spending may be able to help prop up GDP in the interim, if a consumption-driven economy like the United States' is not seeing healthy borrowing and spending from the private sector, it's not going to grow meaningfully.

Today's FOMC meeting won't go into this, though. And the Fed's lesson will not be heeded across the pond.

The problems are even more pronounced with Eurozone QE...

No change coming up or lots of it very quickly…