Citigroup analyst Ed Morse just came out with his most bearish forecast yet, claiming oil prices could fall to $20 a barrel. As for the recent rebound, Morse thinks it looks more like a "head-fake" than a sustainable turning point.

The market, of course, has ignored these concerns, as crude oil prices continue to climb.

But this hasn't stopped similar calls from others pushing their own doom-and-gloom forecasts.

Here's the one glaring problem with all of this bearish analysis...

As I've previously discussed, the nearly 60% plunge in the price of oil resulted in an abnormally oversold market, driven largely by the shorts. And without an actual pronounced decline on the demand side, there is very little likelihood of an oil price "Armageddon" happening anytime soon.

In fact, the oil picture has already begun to stabilize.

Now, admittedly, absent a major geopolitical crisis, we are not going back to triple-digit oil prices anytime soon.

But the trajectory now clearly indicates a new medium-term floor in the mid $50s in New York and about $60 in London. By the fourth quarter of this year, oil prices will likely trade even higher, somewhere in the $70s.

Fueled by the onslaught of huge reserves in U.S. unconventional (shale and tight) oil, the oil picture is rapidly changing. Scarcity has suddenly been replaced with abundance. 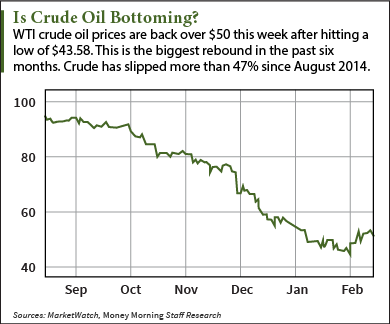 As for demand, it continues to climb globally - where the actual pricing dynamics take place. Just yesterday, OPEC revised its near-term demand projections higher, while cutting expected production from non-cartel nations. According to the cartel, demand for OPEC oil will average 29.21 million barrels per day (bpd) in 2015, up 430,000 bpd from its previous forecast.

OPEC determines its monthly production quota by estimating worldwide demand, then deducting non-OPEC production, resulting in what is referred to as "the call on OPEC."

But as I noted last week, this long time market barometer is undergoing a significant revision, and it's not in OPEC's favor. Now U.S. production is determining the price. Or as Morse puts it, "the call on OPEC" has been replaced by "the call on shale."

Now, the Paris-based International Energy Agency (IEA) expects global growth in oil demand to accelerate to 1.13 million bpd in 2016 from 910,000 bpd in 2015. Some of this is the simple reaction to lower crude oil prices - people use more oil when it costs less, especially in developing parts of the world where the use of diesel and other oil products is needed to generate essential electricity.

And there is another factor these "sky is falling" soothsayers fail to recognize. Despite a price decline of nearly 60% (most of that coming in the last quarter of 2014), we still ended up with the highest daily demand figure in history.

What makes this price decline different from all the others is the cause. Despite increasing global demand, the supply available to meet it has been rising even faster. That has put the brakes on the normal spikes in price that would result from any perceived interruption of the oil flow from world events or a rise in demand.

Of course, the ability to accurately estimate the available supply has become the mantra of the profession.

However, two fundamental mistakes are being made in the process...

What about the dramatic increase in oil tankers floating around the world filled to capacity. When there isn't another tanker to fill there will be a spike in oversupply and prices will drop again.

As u said, shale is everywhere on this planet. So as soon as price start to climb again, it will reach a point where a lot of country will start looking at this option to be energy independant so this will have an impact on the price … It is not tomorrow that we are going to see. 90-100.00/barrel
It looks like A 70.00/barrel market for a long time. Now let's hope IEVM will take advantage of it

Have a great week