Lately Chesapeake Energy Corp. (NYSE: CHK) stock has been getting some unwanted attention from short sellers. A lot of traders see CHK stock price weakness, and they want to profit from an anticipated fall. 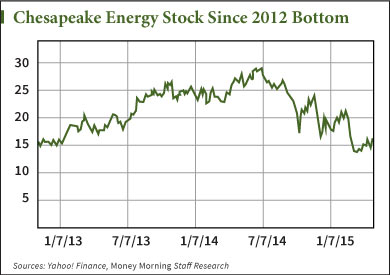 CHK's short float sits at 22.5%. That means of outstanding shares of CHK stock floated - those that are freely bought and sold without restriction -nearly one-quarter have bearish bets taken out on them. That compares to the S&P 500, which has an average short float of 3.7%.

So, why is CHK stock so heavily shorted?

Chesapeake has since recouped a little bit of those losses. As of Friday, CHK stock was trading at $16.54.

Now investors are asking, "Should I buy CHK stock?"

One reason some will is they anticipate a short squeeze play - where a rise in the stock price forces short sellers to buy to cover their short position, adding a bigger pop to the end of any rally. Right now the short float remains elevated. But natural gas prices have regained slightly, meaning the March lows could signal a bottom. And CHK stock is trading at a very low 10.7 price-to-earnings ratio.

Another reason some will buy CHK stock is the company's takeover target potential. In this favorable M&A environment - which tends to take hold in the energy sector in an environment of low energy prices - Chesapeake could get swallowed up in a consolidation of the industry.

But here's what to consider before buying this natural gas giant...

What Investors Need to Know About CHK Stock