The energy market is entering a very competitive and profitable environment. Oil and gas stocks will gain momentum this year as mergers and acquisitions (M&A) pick up and energy prices rebound. 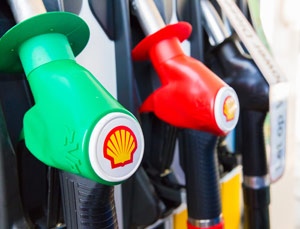 "The Shell-BG [transaction] will be a huge deal, dwarfing anything else out there," explained Money Morning Global Energy Strategist Dr. Kent Moors. "This is also the first clear megamerger option crossing the oil-gas division. We will see more of these as the new energy balance among a widening number of energy sources kicks in."

Now more small oil and gas stocks are about to be seized by bigger ones. The process will result in a new group of heavyweight companies that will lead the market into the "new energy age."

"The most likely targets of M&A activity will be energy companies with attractive land leases, pipelines, or other assets, high levels of debt, and declining cash flows," Moors said. "These types of companies could hand their shareholders a quick profit in 2015 if they get targeted."

M&A has revived the oil and gas sector before. In fact, it has created many of the consolidated behemoths ruling the energy market today...

The History of M&A Among Oil and Gas Stocks 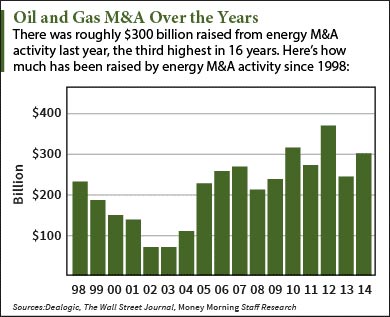 M&A activity is a typical response to bottoming oil prices.

In 1998, crude oil traded near lows of $19 a barrel. Prices had been collapsing due to a financial crisis in Asia that almost caused a global recession.

The energy market reacted with a string of deals that transformed the industry over the next five years. These megamergers represented the birth of Big Oil, especially in 1998 and 1999.

Shortly after the BP-Amoco deal, Exxon snagged Mobil for $85.6 billion. The merger created Exxon Mobil Corp. (NYSE: XOM), which has been the largest U.S. oil company in the world ever since.

With oil prices down nearly 50% since last July, the cycle has already started up again. The last quarter of 2014 saw many high-profile oil mergers reminiscent of the late 1990s and early 2000s.

With M&A activity expected to maintain momentum, there are two oil and gas stocks to watch after their deals close this year...