For May 13, 2015, here's how the stock market did today, earnings reports, the top stock market news, and stocks to watch based on today's market moves... 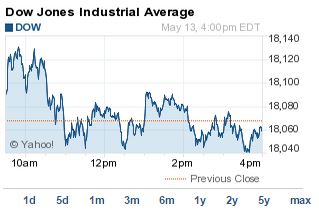 The DJIA Index erased early gains to end today's session down 7 points on news that retail sales slumped in April, fueling new concerns that second-quarter growth may not rebound as projected by economists.