It's certainly possible to reel in profits from a stock market correction – if you know the right strategies to employ. Money Morning's Capital Wave Strategist Shah Gilani not only knows all the tactics to use, he knows what investments to use them on as well.

According to Gilani, three of the most popular strategies for profits in a market decline are: 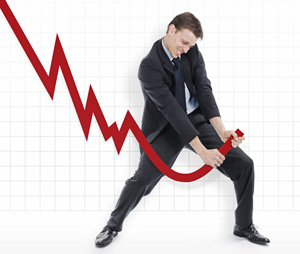 1. Short Selling: Short selling is motivated by the belief that a stock's price is about to decline. The investor who sells the security doesn't own the stock, he simply borrows shares in order to resell them. When the stock's price does eventually fall, he buys the same amount of shares he initially borrowed in order to pay back his loaner, but has profited from the drop in price in the process.

2. Buying Inverse ETFs: An inverse exchange-traded fund (ETF) is an ETF comprised of various derivatives for the purpose of profiting from a drop in the value of an underlying benchmark. They're also known as "short ETFs" or "bear ETFs."

3. Buying Put Options: A put option is a contract giving the owner the right, but not the obligation, to sell a specified amount of a particular security at a particular price within a specified span of time.

According to Gilani, "Investors who aren't at least considering short-side trades are missing major profit opportunities; in essence, they're leaving lots of money on the table. ETFs are packaged products that trade all day like stocks. You can buy them… sell them… and short them. And there are hundreds to choose from."

So what are the best ways to profit from a stock market correction in 2015?

Here's How to Play a Stock Market Correction for Profit

There are ETFs that track most major indexes out there. If you buy shares in an ETF that tracks the Dow, for example, and the Dow goes up, you make money. Conversely, if you believe that a particular index is about to decline, you can "short" shares of its ETF.

Gilani calls this latter move a more defensive tactic – "one that would let you keep the profits you'd already booked and avoid the losses that accompany a market decline," he says.

But there's a way you could be opportunistic about a stock market correction and not just protect your hard-earned money, but earn a whole lot more…

Non-levered Inverse ETF's Don't Work unless you have a sustained downtrend. Otherwise, they lose value (capital) if you hold them when the market is going sideways or up, as it has for four years running. All hedges cost you some money.

Puts, another hedge for possible downside, can cost 3% of the value of your assets for a six-months options contract. It then expires worthless if not exercised. Then you need to buy another one. Insurance is expensive and as always, no free lunch either way.

Very Rare to have such honesty portrayed .
Thank You !!