For BBRY stock, the market reaction to today's (Tuesday) missed earnings was a familiar one.

The once high-flying BlackBerry Ltd. (Nasdaq: BBRY) stock slumped about 4% to below $9 a share. In its heyday BlackBerry stock traded at more than $100 a share.

BlackBerry posted a loss of $0.05 a share for its fiscal first quarter, missing forecasts for a loss of $0.04. Revenue also missed, coming in at $658 million, below expectations for $680 million.

The revenue figure was down 32% from the same quarter a year ago and marked the seventh consecutive quarter of double-digit declines.

BlackBerry is still trying to stop the bleeding from its tragic miscalculation of the impact of Apple Inc.'s (Nasdaq: AAPL) iPhone. The global market share of its mobile phones has plummeted from 20% to 0.4% over the past five years. 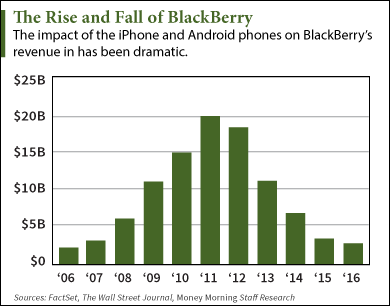 Chen has made some clear progress. Revenue from software and technology licensing was up 150% in the quarter ended May 30, to $137 million. And in a statement, he struck an optimistic note.

"I am pleased with the strong performance of our software and technology business. This is key to BlackBerry's future growth," Chen said. "Our financials reflect increased investments to sales and customer support for our software business. In addition, we are taking steps to make the handset business profitable."

For investors, the question is whether Chen can make BBRY into a profitable niche company based on software and licensing.

The company does have a strong reputation for security in mobile devices - a big asset in a world beset by cyberattacks. Chen has built on that by acquiring three security-focused companies over the past year.

He's acknowledged reality by pushing ahead with software products that run on the two dominant smartphone platforms, the iPhone and Google Inc.'s (Nasdaq: GOOG, GOOGL) Android.

BlackBerry also has introduced software that helps connect smaller networked devices to the Internet of Things.

In short, BlackBerry has done just about everything it can to get back on its feet and revive BBRY stock.

But here's why it may not be enough...