Whether to buy Microsoft stock is a question investors started pondering last year as the iconic tech company shed its decade-long status as a perennial laggard. 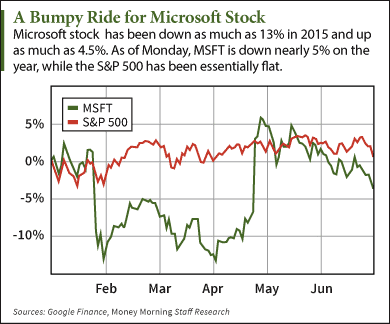 As Microsoft Corp. (Nasdaq: MSFT) stock soared nearly 40% from November 2013 to November 2014, investors were eager to jump on board.

But since then, investors have had reason to wonder if it's still a good idea to buy MSFT stock.

The confusing price action has left Microsoft stock down nearly 4% on the year, slightly worse than the market averages. MSFT closed at $44.40 on Monday.

And as the following price forecasts show, analysts can't seem to make up their minds...

Back in April, both Goldman Sachs Group Inc. (NYSE: GS) and Citigroup Inc. (NYSE: C) put an unusual "Sell" rating on MSFT. Citi reiterated that rating this week along with its gloomy $37 one-year price target.

Here's why they're wrong...

I am going to start a cell phone company and I'll see if I can sell investors on the concept of my huge growth potential in China starting with my 0% market share – BIG opportunity, you betcha!!!

Go for it, you got everything to gain and nothing to loose if you don't try.
GOOD LUCK AND ALL THE BEST
GWD