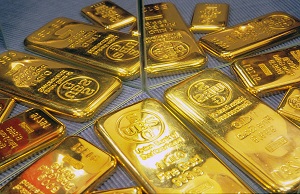 Greece has capped cash withdrawals to keep banks from collapsing after Greeks dashed to yank money out of ATMs following the referendum call at the start of the weekend. The maximum withdrawal amount has been set at 120 euros ($134) for the week, after the government reopened some banks Wednesday to help pensioners who don't have bank cards. Greeks are limited to daily ATM withdrawals of 60 euros ($67) and cannot send money abroad without special permission.

Investors across Europe are reacting by buying gold.

Online retailer CoinInvest.com reported gold coin sales spiked Monday to the highest level since Cyprus limited cash withdrawals in 2013, according to Bloomberg. Buying was brisk from customers in Germany, France, and Greece.

The U.K. Royal Mint said demand from Greek customers for Sovereign gold coins was double the five-month average in June.

Additionally, global assets in gold exchange-traded funds (ETFs) have risen. Assets in ETFs rose by 6.3 metric tons last week, the biggest addition since Feb. 6, according to data from Bloomberg.

Buying Gold: Safer than Money in the Bank

Gold has historically been the go-to, safe, tangible commodity in times of turbulence. Interest in gold as a real money alternative has been stoked anew amid Greece's banking situation and Puerto Rico's looming $72 billion default.

Even global central banks recognize the benefits of gold and continue to be robust buyers.

Central banks have been net buyers of gold for 15 straight quarters, according to the World Gold Council. Last year, the world's central banks bought 477 tons, a 17% year-over-year increase. That marked the second-highest year of central bank net purchases for 50 years, second only to the 544 tons added to global gold reserves in 2012.

For 2015, the WGC expects central banks to be net buyers for the sixth year in a row with more than 400 tons of gold purchases.

Also expected to be buying gold in a big way this year is India, which accounts for as much as 25% of the world's gold consumption. Pent-up demand has surfaced since late last year when the Reserve Bank of India dropped rules requiring importers to sell 20% of shipments to jewelers for re-export.

Peak Indian demand will come in September after the monsoon season ends. A flurry of weddings and festivals follow the rainy season, occasions when it is considered lucky to buy and give gold. A heavy rainfall, critical for the success of rice crops, will be key.

How to Buy Gold for Protection in Any Crisis

Everyone has their own preferences for investing in gold. If you're relatively new to investing in and buying gold, here are some resources to get started:

With Greece in crisis gold is the way to go! Universally accepted and everyone wants it. Not to mention it's way more steady than the Euro or Dollar! Great post Diane!

Gold is a way to secure your investments safely and with minimal risk. My grandfather had bought gold for this very purpose. Like you said with the situations of Greece and Puerto Rico, gold may be the best way to loss of money.

I wasn't aware that this created a surge of gold purchases. It will be interesting to observe the wax and wane as this part of the world changes. I'll certainly have my eye on it.

I've always tried to be financially responsible. I've considered investing in precious metals to mitigate the risk of possible monetary failure. Even if the currency of my country fails, it looks like that I can transfer my wealth to another nation if I have enough gold in my reserves.

I cannot imagine going through a financial crisis like that would be terrible! I think that buying gold in that situation might give you something of steady worth, because the worth of money in their country will change. I would be purchasing gold in that circumstance and think someone would be wise doing so.

This is a very interesting article, and I like some of the observations here about Greece's economy. I had never realized that buying gold can be safer than money in the bank. Thanks for sharing this information with me, as it certainly has caused me to think.