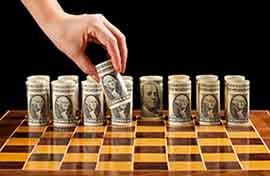 Criminals who engage in stock manipulation are subject to civil and criminal penalties.

But prison time and hefty fines certainly haven't stopped budding manipulators from trying. Market manipulation is up 37% in the last decade, according to the U.S. Securities and Exchange Commission (SEC).

In fact, nowadays, it's par for the course. CNBC's popular "Mad Money" host Jim Cramer admitted he used to habitually manipulate the market when he ran his hedge fund. In a 2009 interview with TheStreet.com, he called it "a fun and lucrative game" and suggested that all hedge fund managers do it.

Of course, the rise in market manipulation is far from surprising. After all, there's a reason we compare Wall Street brokers to predatory animals - they are willing to go to any length to profit, even if it harms others less advantaged in the process. Just look at the subprime crisis we're still suffering from.

What Is Stock Market Manipulation?

Stock market manipulation is the intentional distortion of market prices by brokers or by entire investor enterprises. These manipulators gain profits at the expense of other market participants' losses.
"Manipulation can involve a number of techniques to affect the supply of, or demand for, a stock," recites the U.S. Securities and Exchange Commission (SEC). "They include: spreading false or misleading information about a company; improperly limiting the number of publicly available shares; or rigging quotes, prices or trades to create a false or deceptive picture of the demand for a security."

These four manipulators expected to break away clean with not just millions, but billions...

Stock Manipulation Case No. 1, Enron: In 1985, after merging two pipeline companies to form Enron Corp., founder Kenneth Lay established the market for selling electricity. He successfully lobbied the U.S. Congress to deregulate the sale of natural gas. Lay also lobbied for, and was granted, government deregulation over his company's earnings reports.

First, they failed to report losses in order to keep investors interested in what seemed like a profitable company.

Second, the financial officers concealed debts so that they didn't show up in the company's accounts. Lay and CEO Jeff Skilling used accounting loopholes and misappropriated investments to keep billions off the company's records. 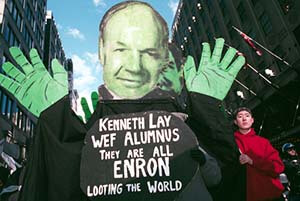 Protesters hold up an effigy of Enron founder Kenneth Lay during a march against the World Economic Forum Feb. 2, 2002 in New York City.

The Enron scandal ended in one of the biggest bankruptcies in history. Enron stock crashed from $90 per share in mid-2000 to less than $1 by the end of November 2001. Investors lost more than $70 billion.

The scandal eventually led to the enactment of the Sarbanes-Oxley Act to expand the accuracy of financial reporting for public companies and punish those attempting to defraud shareholders. The Texas-based energy-trading giant, once America's seventh-biggest company, declared bankruptcy on Dec. 2, 2001.

Stock Manipulation Case No. 2, "The Cartel": On May 20, 2015, Citibank N.A., JPMorgan Chase & Co. (NYSE: JPM), Barclays Plc. (NYSE: BCS), and Royal Bank of Scotland Group Plc. (NYSE: RBS) (a conglomerate that actually referred to themselves as "the cartel") pled guilty to a felony count of conspiring to violate the Sherman Antitrust Act. Specifically, the banks tried to rig the U.S. dollar-to-euro exchange rate. Another bank involved in the scandal, UBS Group AG (NYSE: UBS), pled guilty to another charge.

According to a May 20 exclusive from Reuters, "The misconduct occurred until 2013, after regulators started punishing banks for rigging the London Interbank Offered Rate (LIBOR), a global benchmark, and banks had pledged to overhaul their corporate culture and bolster compliance."

UBS pled guilty to a one-count charge of wire fraud for manipulating the LIBOR, as well as other benchmark interest rates. The other four banks were fined over $10 billion for failing to attempt to stop traders from manipulating forex rates.

The next notorious case coincided with the height of the Great Recession in 2008...

Citibank increased their Silver Derivative positions since June by a around $50 billion or 10X what they were in May. "Paper" Silver spiked-down about $1.00/ounce Tuesday while the U.S. Mint was running out of Silver Eagle Coins for July. JP Morgan is in there too buying derivatives. Demand for physical silver is exploding but the price went way down. Clearly a suspicious divergence, at least. Probably manipulation.