The Shanghai Stock Exchange is up more than 3.4% today after falling more than 11% over the previous four trading sessions. Even with today's gain, the Chinese index has fallen more than 26% since mid-June.

The Chinese market remains incredibly volatile, and many on Wall Street are predicting another stock market crash in the country.

The Chinese government has been doing everything it can to prevent a stock market crash. That includes an interest rate cut by China's central bank, a halt on IPOs, and even a reduction in state media coverage of the Chinese stock market. 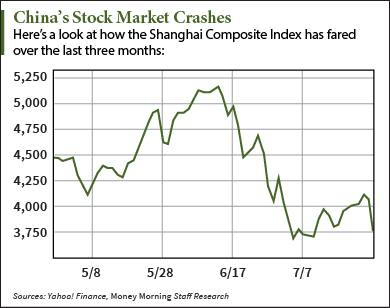 While that worked for several weeks, the markets once again tumbled on Monday, falling 8.5%.

"Based on everything the Chinese government and regulators have done to stem the sharp sell-off in Chinese shares and pump them back up, the unexpectedly big drop Monday, on virtually no discernible bad news, could signal a serious crash ahead," Money Morning Capital Wave Strategist Shah Gilani warned.

Before the crash, Chinese stocks had absolutely soared. The Shanghai Stock Exchange gained 134% in the last year, while the smaller Shenzhen index climbed 173%.

During that bull run, millions of new investors started putting their money to work in stocks. The China Securities Depository & Clearing Co. estimates an average of 170,000 new brokerage accounts have been opened each week in China this year.

"The bad news turned out to be the new investors were mostly woefully undereducated speculators with no practical knowledge about stock trading," Gilani said. "[There was also] a frighteningly large contingent of corporate executives who jumped into the markets with company capital, believing they could make more money riding the bull market than manufacturing goods in their slowing domestic economy and for a flat-lining global market."

During Monday's crash, roughly 1,500 securities in the country were halted after hitting a 10% down limit. That's about half of all listed stocks.

"If the investing (or was that speculating?) public can't sell shares that are halted or meet margin requirements without selling more stock, and all attempts by the government fail to stem widespread panic selling, there will be a stock market crash," Gilani continued. "A devastating stock market crash in China would upend the Chinese economy and undoubtedly create a wave of contagion that could take stocks down across the globe."

That includes the U.S. stock markets. When Chinese markets fell on Monday, the Dow fell more than 120 points.

But even if a contagion crash were to take place in the United States, investors can take several actions in order to protect their capital.

Here's what Gilani recommends doing to protect yourself from another stock market crash in China...