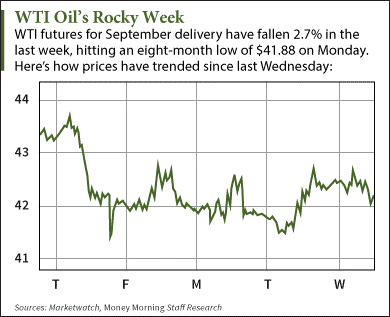 Brent crude oil prices fell half as much. The international benchmark ticked down 1% to trade at $48.32 a barrel after the report. Brent futures have shed 8.6% so far in August.

Despite the persisting glut, demand will eventually outpace supply. And today's low prices give us the perfect opportunity to buy certain oil stocks at a discount before prices rebound. After all, many large oil firms like Chevron Corp. (NYSE: CVX) and Exxon Mobil Corp. (NYSE: XOM) have depreciated more than 22% since last summer.