Although stocks have recovered somewhat, the six consecutive days of losses have many investors asking, "Is this a bear market?"

In that span, the Dow Jones Industrial Average shed 1,878.74 points, or 10.7%. That technically qualifies as a stock market correction. Bear market territory is considered a drop of 20% or more. 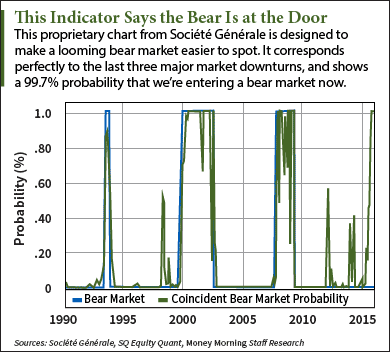 A chart from French multinational bank Société Générale S.A. (OTCMKTS ADR: SCGLY) says yes, this is a bear market. And very convincingly, too - it actually indicates there's a 99.7% chance we're already in a bear market.

The chart was created earlier this year by SocGen's head of quantitative equity research, Andrew Lapthorne. While the details are proprietary, it uses "macroeconomic and fundamental equity variables."

That's a mouthful, but backtesting has shown it's uncannily accurate. The chart corresponds perfectly to the last three major stock market downturns.

"When you view the U.S. equity market through the prism of investment-style performance," Lapthorne wrote in a note earlier this month, "you can see that investors are positioning themselves exactly as you would expect if faced with an economic deceleration."

This week, SocGen's global strategist, Albert Edwards, pointed to Lapthorne's chart as he made his case that this is a bear market.

"Most investors only realize the economy is in a recession well after it has begun. The same is true of an equity bear market," Edwards wrote in an Aug. 27 note to clients.

Money Morning Capital Wave Strategist Shah Gilani said the prospect of a bear market, while distressing for many, does serve a purpose.

"What the markets need is a good, long flushing-out," Gilani said. "They need to squeeze out excesses built into artificially inflated equity prices and bond prices."

That's good - as the SocGen chart isn't the only evidence telling us this is a bear market...

Is This a Bear Market? It's Starting to Look That Way

While investors can't be sure if this is a bear market, the increasing probability that we could have one means everyone should be taking precautions.

And that does not mean sitting on the sidelines.