Eni SpA (NYSE ADR: E) is the most talked about natural gas stock right now thanks to a "supergiant" discovery in the Mediterranean Sea.

Yesterday, the Italian oil and gas titan stumbled upon a "supergiant" natural gas field named Zohr about 120 miles from the Egyptian coast. According to the U.S. Energy Information Administration (EIA), Zohr could hold up to 30 trillion cubic feet of gas. That makes it one of the largest natural gas deposits ever discovered. 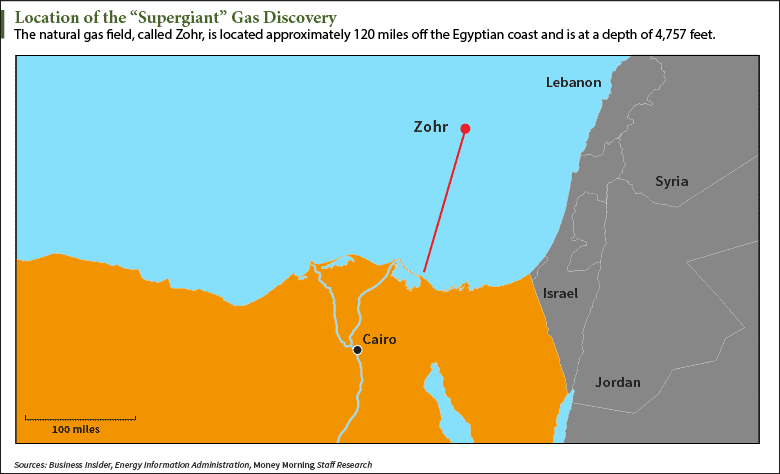 "Zohr is the largest gas discovery ever made in Egypt and in the Mediterranean Sea and could become one of the world's largest natural gas finds," Eni said in a press release.

The new gas field will become a game changer for Egypt's energy industry. The country's oil and natural gas shortages are one of the many problems that have sparked unrest in the last few years. Zohr could provide Egypt with economic stability and energy independence.

"The discovery, after its full development, will be able to ensure satisfying Egypt's natural gas demand for decades," the company said.

These prospects make Eni a solid long-term buy as natural gas prices climb over the next 10 years...

Coal production has been drastically decreasing for years now. By 2020, about one-third of the United States' coal-generating capacity from 2012 will have been retired.

Second, the United States will become a major player in the burgeoning liquefied natural gas market. The International Energy Agency (IEA) says global LNG demand will double by 2025. The United States is expected to provide 8% to 12% of all global LNG exports over the next five years as the Department of Energy approves more export projects.

"The combination of these factors means we now have the makings of a nice pricing foundation moving forward," Moors noted. "That will translate into opportunities in several places in the natural gas production sequence."

Go here for Dr. Moors' analysis of where the natural gas market is heading - and how you can scope out the best investing opportunities...

Alex McGuire is an associate editor for Money Morning who writes about commodities. Follow him on Twitter at @AlexMcGuire92 for the biggest updates on the commodities market.

Morning, I'm just wondering, if investing $2,000 in the gold plated computer what steps would have to take place in perfect world (please list) and over what duration of time to make $100,000 !

Great to hear this long position in LNG is going to be very profitable and predictable for the next 20 years based on my research with Oxford. All of the experts are saying the same thing about liquid natural gas but there is a great disparity about the price of what hey price of a barrel of oil will be whether it's OPEC for the US and that disparity means those prices can be quite volatile this could set up a special trade also but I read about on this morning's newsletters. So there are many ways to profit in the energy sector if you know what you're doing . I hope I will still have enough education and I will be able to help others here and elsewhere with my comments