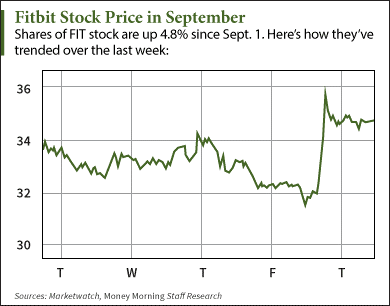 The boost in the Fitbit stock price came after Morgan Stanley upgraded Fitbit stock to "overweight" – the equivalent of a "Buy" rating. The investment bank recently found that the company controls 21% of the wearable tech market. It set a price target of $58 and cited Fitbit's dominant market share over Apple Inc. (Nasdaq: AAPL) as the main factor behind the stock's growth. That represents a gain of more than 62% from today's high price.

"We see less Apple Watch cannibalization risk," wrote Katy Huberty, a tech analyst for Morgan Stanley, in a note to investors today. "Fitbit's leadership in a large ($10B) and fast growth market merits a high valuation."

The stock still has momentum from its last stellar earnings report. Fitbit posted earnings of $0.21 per share in the second quarter, smashing Thomson Reuters estimates of $0.08. It generated revenue of $400 million and sold 4.5 million devices.

Despite the company's strong market share and financials, we recommend holding off on buying Fitbit stock for a few more quarters. Fitbit's top- and bottom-line numbers need to keep showing the company has a firm grip on the market it supposedly dominates. That means consistently outselling competitors like the Apple Watch and Jawbone.

"For them to succeed, they'll have to be agile and execute a plan to attack their niche market," Money Morning Defense & Tech Specialist Michael A. Robinson said when the Fitbit stock price soared after its IPO. "They need to figure out how long they can sustain a competitive advantage."

Alex McGuire is an associate editor for Money Morning who writes about upcoming IPOs. Follow him on Twitter at @AlexMcGuire92 for all of the biggest IPO news.

More on IPOs: The IPO roadshow – sometimes referred to as a "dog and pony show" – is the most important step a company takes to market its IPO. So important, in fact, that 82% of institutional investors worldwide cite it as a key component in their buying decisions. Here's a detailed breakdown of what happens during the roadshow process…