We're just hours away from Janet Yellen's 2:00 p.m. press conference, and investors are still in the dark on whether interest rates will rise following the Fed meeting today (Thursday).

U.S. markets were flat this morning ahead of the Fed meeting, with the Dow Jones Industrial Average down six points in early trading.

Fed Chair Janet Yellen has not provided any indication of whether they will impose an interest rate hike or postpone raising rates again. Federal Reserve officials hold a self-imposed blackout period in the days leading up to Fed meetings and do not speak to the media. 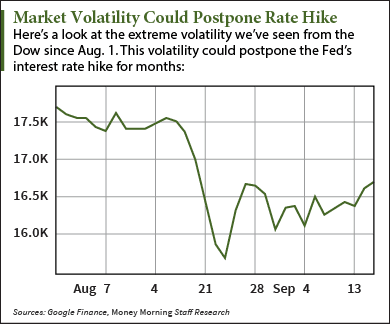 It looked certain the Fed would raise interest rates this month until extreme volatility hit the market in August.

Now, most economists believe an interest rate hike will be postponed. We could see one following the FOMC meeting in October or December. Fed officials could also wait until 2016 to raise interest rates.

According to a Wall Street Journal survey, only 46% of economists polled expect the Fed to raise rates today. That number was as high as 82% just last month.

But Money Morning Chief Investment Strategist Keith Fitz-Gerald says the Fed meeting today could still result in an interest rate hike, even if that's not a smart decision.

"I think it would be irresponsible of the Fed to raise interest rates now, but that doesn't change the fact that they've ignored data and reality for so long that I think they're going to go ahead and raise rates," Fitz-Gerald said. "The Fed's models don't reflect what is happening to the middle class, which is getting eviscerated."

If we see an interest rate hike following the Fed meeting today, here's the impact it will have on stocks...