But to understand Facebook's climbing stock price, investors need to look past the actual platform. It's now much bigger than monthly active users and new signups to CEO Mark Zuckerberg's dorm-room creation.

Zuckerberg is proving his ability to anticipate new avenues for monetization and growth.

Even if younger social media users are bypassing FB, Zuckerberg found a way to keep them from straying too far…

While Facebook may be closing in on maturity, its acquired sites are still enjoying healthy user growth numbers.

WhatsApp is a platform that allows for mobile messages across different phones without charging an SMS fee.

Instagram operates as a social media platform that only allows you to upload photos through a mobile phone or tablet. It has 400 million MAUs, according to its website on Sept. 24. That is more than Twitter's 316 million (claimed on its own website). 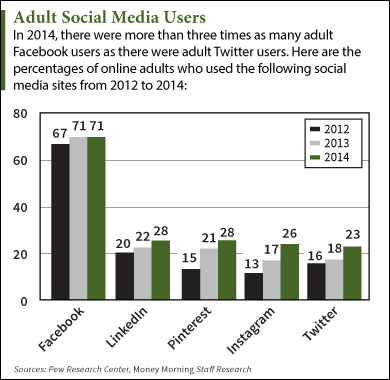 These MAUs are key because they will be the targets of Facebook's big revenue driver: mobile ads.

How much revenue could FB generate from the mobile market?

Nice article Jack. Prices will continue to rise if FB can sustain +40% growth for the next few years which may prove difficult. I like FB's prospects globally but I think there are better opportunities out there as the fundamentals look to be stretched.