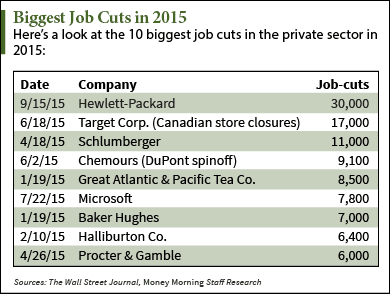 According to the global outplacement consultancy Challenger, Gray & Christmas, September layoffs were up 43% from August. The total was also up 93% from September 2014, when 30,477 planned layoffs were announced.

Oil companies had dominated the layoff tallies in 2015's first two quarters. But many of the September layoffs came from the public sector and the computer industry.

For the year, the biggest job cutting sector is energy, with 72,708 planned job cuts reported since Jan. 1. While the pace has slowed, the sector still looks vulnerable.

"We could see more fallout, which appears to have its origins in China, which after years of building up its national infrastructure appears to now have far too much capacity," the Challenger, Gray & Christmas report said. "As a result, manufacturing plants, retail stores, and even entire apartment buildings are sitting empty."