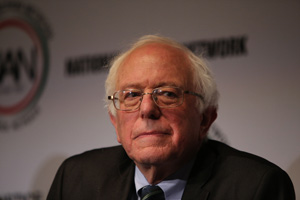 Bernie Sanders at the National Action Network convention on April 8, 2015

It is a question for which many American voters demand an explanation - and for good reason...

That's because this country was founded under capitalism. And while there are several very viable criticisms of capitalism, historically, it has proven to be better than any other economic system.

"Communism was such an abject failure that by the end of the 1980s capitalist West Germany had almost four times the GNP/capita of Communist East Germany. In 1991 the Soviet Union disintegrated and the Eastern European Communist countries eagerly shed their imposed Communist past for membership in the European Union. Communist China (1949-1977) found communism such a failure (Great Leap Forward and Cultural Revolution) that under Deng Xiaoping it turned to a massively successful state imposed neo-capitalist Four Modernizations (1978-2014).  Fascist countries (Nazi Germany and Mussolini's Italy) used economic development for militarist expansionism that led to their demise and the deaths of tens of millions of people. By contrast, their successor democratic capitalist states have been highly successful economically.

Any voter in the 2016 presidential election should be very clear on exactly what kind of reform and principles Bernie Sanders stands for - especially when it comes to socialism.

Here are Sanders' views - straight from the horse's mouth, as they say - according to his answers in the Democratic debate last night...

Is Bernie Sanders a Socialist?

"You call yourself a democratic socialist," Cooper said. "How can any kind of socialist win a general election in the United States?"

Sanders answered, "Well, we're going to win because first, we're going to explain what democratic socialism is. And what democratic socialism is about is saying that it is immoral and wrong that the top one-tenth of 1% in this country own almost 90%, almost - own almost as much wealth as the bottom 90%. That it is wrong today, in a rigged economy, that 57% of all new income is going to the top 1%. That when you look around the world, you see every other major country providing healthcare to all people as a right except the United States. You see every other major country saying to moms that when you have a baby, we're not going to separate you from your newborn baby because we are going to have medical and family paid leave like every other country on earth. Those are some of the principles I believe in, and I think we should look to countries like Denmark, like Sweden and Norway, and learn from what they have accomplished from their working people."

Cooper followed up, "Denmark is a country that has a population of 5.6 million people. The question is really about electability here and that's what I'm trying to get at. The Republican attack ad against you in a general election writes itself: You supported the Sandinistas in Nicaragua, you honeymooned in the Soviet Union, and just this weekend you said you're not a capitalist. Doesn't that ad write itself?"

Sanders replied, "Well first of all, let's look at the facts. The facts that are very simple. Republicans win when there is a low voter turnout and that is what happened last November. Sixty-three percent of the American people didn't vote, Anderson. Eighty percent of young people didn't vote. We are bringing out huge turnouts and creating excitement all over this country. Democrats at the White House on down will win when there is excitement and a large voter turnout, and that is what this campaign is doing."

Anderson prodded one more time, "You don't consider yourself a capitalist, though?"

"Do I consider myself part of the casino capitalist process by which so few have so much and so many have so little? By which Wall Street's greed and recklessness wrecked this economy?" Sanders replied. "No, I don't. I believe in a society where all people do well, not just a handful of billionaires."

You can watch the exchange for yourself.

Is Bernie Sanders a capitalist?

It's interesting to note that during the debate, Democratic front-runner Hillary Clinton weighed in on the subject. She said she agrees with Sanders' views on income inequality but defended capitalism and said it would be a mistake for Americans to abandon an economic system that helps small-business owners and created the middle class.

Donald Trump Agrees on These Issues with... Bernie Sanders? On the surface, billionaire Donald Trump and self-described "democratic socialist" Bernie Sanders are polar opposites. But their views on several issues at the heart of the 2016 election bear much in common...