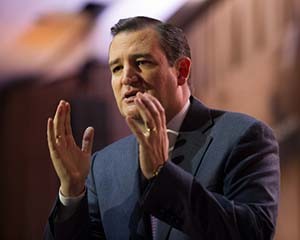 Ted Cruz's plan, entitled "A Simple Flat Tax for Economic Growth: A 10% income tax and a 16% business tax would put an end to the Eight Lean Years of Obama," imagines "exports and manufacturing jobs booming, the trade deficit falling, and every American filing his or her taxes on a postcard or iPhone app."

"Also, for a family of four, no taxes whatsoever (income or payroll) on the first $36,000 of income," the Texas senator detailed on Wednesday night.

Here is what else Ted Cruz has in mind...

And here are the corporate tax changes Cruz proposed:

Sen. Cruz's tax reform would be a significant shift from the current tax code. It would eliminate taxes by $3.6 trillion, according to Tax Foundation, a nonpartisan think tank, over the next 10 years. However, the plan would reduce tax revenue by $768 billion over that same amount of time when taking into consideration economic growth from increases in the supply of labor and capital.

Tax Foundation said these changes to the current tax code would increase the incentive to work and invest and would greatly increase the U.S. economy's size in the long run. Therefore, Sen. Cruz's plan would eventually result in higher incomes for taxpayers of all income levels.

The biggest caveat, though: The plan would also increase the federal government's deficit by over $3.6 trillion, according to the think tank's calculations.

The Magic Number Is 14.5: Kentucky senator and Republican presidential hopeful Rand Paul first outlined his plan for restructuring the federal tax system in a Wall Street Journal op-ed on June 18. He had a brief shining moment during the CNBC debate to further expand on his tax code reform proposal. Here's what the Kentucky senator has in mind...

Would like to see an analysis of the Cruz plan for a single person, and married no children.