The Microsoft stock price has been riding on a cloud lately. 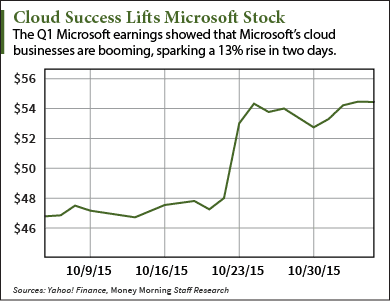 Since taking the helm in February 2014, CEO Satya Nadella has pushed a "mobile first, cloud first" strategy that focuses on segments that offer MSFT stock the best chances for growth.

He realized that Microsoft needed to act quickly to offset slowing Windows sales – the result of the relentlessly shrinking PC business.

"I think he is realistic about the role of Windows," Gartner tech analyst David Smith told the Associated Press last month. "[Nadella] is much more focused on cloud computing and other services. That's where the future of the company will be."

And despite the recent successes, Microsoft is not standing still with its cloud businesses. In the weeks since those Q1 earnings, the Redmond, Wash.-based company has announced several initiatives to grow its cloud businesses even faster. And that bodes very well indeed for the future of Microsoft stock.

The cooperative effort with Red Hat is a far cry from Microsoft's days under former CEO Steve Ballmer. Back in 2001, Ballmer infamously referred to Linux as a "cancer."

Meanwhile, Nadella is pursuing an even bigger cloud opportunity for Microsoft – his native country of India.