The chances of an actual interest rate hike by the U.S. Federal Reserve just got real - and asset prices are on the move...

Team Yellen got a big reason to raise rates with Friday's release of the October U.S. employment numbers. The report surpassed most estimates by adding 271,000 jobs; the consensus was for about 100,000 fewer than that.

This puts the unemployment rate at 5% - its lowest level since 2008. Markets immediately reacted with lower bond prices, lower commodity prices, and in many cases, lower stock prices.

The Fed could announce a rate hike at the end of its next policy meeting on Dec. 16. That would be especially good news for a certain U.S. industry I'll talk about today.

One particular stock in this sector climbed 65% in a little over two years after the last rate hike. But now you have the chance to make more - and in less time. The easy options play I outline here could double your money in just weeks...

These Stocks Benefit Most from a Fed Rate Hike

Markets peaked a little over a year later, climbing another 25%. The stocks that benefitted the most in that time were banks and brokerages.

A lot of these firms' profits rely on higher interest rates. As the Treasury rate climbs, most businesses see the cost to borrow money increase, which puts a damper on profits. But when you are on the other side of that coin, like banks and brokerages, you see your profits actually increase.

And the banks and brokerages that stand the most to gain are ones that are a bit of both...

Charles Schwab Corp. (NYSE: SCHW) is just that. It's a bank by default, with a few branches scattered among the United States. But its brokerage service is where it stands to rake in the profits.

Charles Schwab is one of the world's fastest-growing brokerage houses. It added an average of 80,000-plus gross accounts every month in 2014.

Tack this upcoming Fed-driven jolt of money into an already growing company and that should equal a higher stock price for SCHW by the end of 2015. 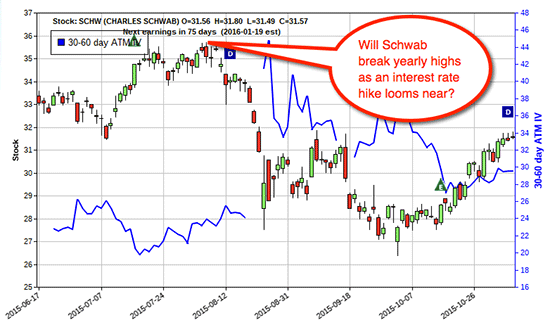 So let's take a look at one easy way of playing this rate hike to our advantage.

How to Collect Quick Profits on SCHW

The following chart shows Friday's trading activity for the SCHW 33 calls with an expiration date of Jan. 15, 2016. The cost of these calls (as of Friday's quote) is mid-priced at $0.98. 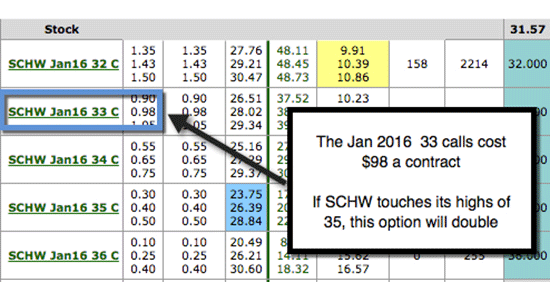 You could purchase the stock, if you want to hold it long-term because you think rate hikes will just keep coming. But think like a short-term trader for moment (like I do, which is why options make sense to me)...

With this SCHW call option, you get the ability to control $3,300 worth of stock for just $98 for the next two months.

That's much more appealing to me than buying the shares - and these three scenarios show what I mean:

The screen shot of $0.98 call price for SCHW Jan. $33 call is not what I see, even with down stock price. Where did you get this call price screen????

Hi Tom, Looking at your screen shot and addressing every ones comments, I think you took your $.98 option price from the close on Thurs. and not Fri. SCHW closed at $31.57 (which is the price on your screen shot) on Thurs. So, do you recommend a GTC order for around $.98?
Thanks, Linda

OMG, people take a breath. He was researching on Friday, Friday the stock jumped a couple points. He was likely doing it Thursday night and using Thursday's close data. The JAN 16 $33 was at $.975 (the $.98 cents) he said it was on Thursday's close data. Do a little research before you rip into the guy. And the same logic of the trade still stands. If Thursday's closing price was $31.57 and his play was 2 positions OTM on the Call (the $33) then if the price today is $33.33, then look 2 positions OTM on the Call using TODAY'S price, or the JAN 16 $35 and lo and behold……its at $1.00 (almost exactly the same as he said)! If you don't understand that many recommendations on here, especially options trades, are "strategies" that must be adapted to the current market conditions whenever you go to make the trade; and not literal positions you MUST get (which will likely never happen because by the time the recommender sees it and writes about it…the market has always changed but the strategy is still good)….then maybe options aren't for you.

Does federal hike the interest rates on 17 December?

The Federal Open Market Committee (FOMC), the Fed entity that sets rates, meets Dec. 15-16. It is assumed, but not certain, that the FOMC will raise its interest rate at that meeting.