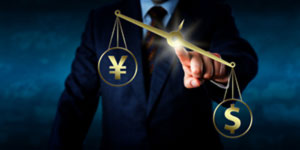 "If you live in the West, and this goes down, be afraid, be very afraid," Smart wrote in an op-ed for "future of money" site Coin Telegraph on Sept. 10. "The world is starting to prepare for life without the dollar and westerners should, too!"

On Friday, the International Monetary Fund (IMF) recommended the yuan, also known as the renminbi, to be included in its $280 billion basket of currency reserves known as Special Drawing Rights (SDR). The Chinese yuan-IMF decision places the currency alongside the U.S. dollar, the Japanese yen, the British pound, and the euro.

Inclusion becomes official at the end of the month on Nov. 30, according to French news service AFP.

As an SDR world reserve currency, the Chinese yuan is now legitimized as a serious competitor to the U.S. dollar.

Chinese Yuan-IMF Decision: Times Are Changing for the Dollar

The U.S. dollar's favored status as a world reserve currency has long churned up demand – as a global benchmark, other countries use the USD for international trade. The effect has propped up the dollar.

But increasingly there's another global currency option for trade – the yuan.

"Times have changed, and the shoe is on the other foot. America – land of perpetual warfare – is swimming in $18 trillion in national debt," Smart wrote. "The U.S. owes almost $3 trillion to just Japan and China alone as it prints about $696 million per day. According to the IMF or the world's loan shark, China has even passed the U.S. as the world's largest economy."

Smart continues, "Over the last several years, many countries, especially in East Asia, have stopped using the U.S. dollar for trading purposes. These are called 'bilateral trade agreements,' and they're becoming as popular as cat videos on YouTube."

He notes that more and more, countries are instead opting for the Chinese yuan…

It seems things are changing in the USA

Though the IMF is firmly in the US pocket it did not have a choice in the matter.
China had already started the AIIB, to which all of the US's major allies, other than Canada and Japan, flocked like starlings to a cherry tree.

The past Harper government, obviously to become the new pet poodle, a position, which the UK appeared to have vacated and Japan has its own issues with China in the South China Sea.

China has pursued the course of getting its Yuan admitted as World reserve currency since a decade now. When frustrated it founded the AIIP in direct competition to the IMF.

Like a boy, trying to stick a finger in the dike, the IMF has now decided to admit the Yuan. Too little – too late, I am afraid, after China is well on its way to unify the Eurasian super-continent.

What happens if China wants to back the yuan with Gold?

If you own gold and silver, GREAT! If the U.S. would have stayed on the gold standard, we wouldn't be trillions in debt cause we would be forced to live within a budget.

Keep up the good work !

I have been watching this for a while…but the question is how does a person play this move?

It is a difficult task to sell off everything and buy gold,if you can buy enough plus fueling a collapse of unknown amount say 10-15%. You are creating pandemonium and great losses to mega clientele. It is a cut throat game you play for all and would it not be better to recommend that the dollar be attached to gold as it was before Nixon screwed up. Drastic moves only benefit the people behind the veil and serves no economic benefit to the masses. Preventing chaos is much preferred to creating it. The USA should be able to maintain itself as the Reserve Currency and carry on as ever. I think it is time to make and create solutions to world markets and stop creating fear and worry. Obama will know what to do, you have to have faith.

you must be joking. Obama does not know any thing . He is not interested in any thing but re distributing wealth and changing this country.

not so fast,remember the copper trade and bond issues they have,all they really have is a false sense of security,the cash reserves are gone if we embargo all trade on a t note sell off

did the IMF not see the "60 Minutes Empty City" investigation?