India is now the world's fastest-growing major economy, making it an ideal place to look for stocks to buy now as U.S. multinational companies seek to take advantage of the explosive economic growth there.

According to the International Monetary Fund (IMF), India's gross national product is expected to grow at a rate of 7.3% in 2015-2016, easily beating China's expected GDP growth of 6.8%. 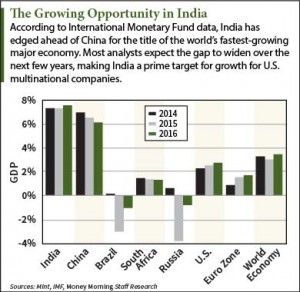 Next year, the IMF sees the gap widening, with India's GDP growth reaching 7.5% and China's shrinking to 6.3%.

So while China's economy is five times the size of India's, the India growth story is getting much more compelling.

One big reason India is looking more attractive to U.S. companies is the growth of the middle class there. Ernst & Young project that the middle-class population of India will grow from 50 million today, or about 5% of the total, to 200 million in five years. And by 2030, India's middle class will swell to 475 million.

Of all the economies from the once-touted "BRIC" group (Brazil, Russia, India, China), India's is now the strongest.

The chief catalyst behind India's sudden rise to the top is Prime Minister Narenda Modi, who was elected in May 2014.

How Prime Minister Modi Has Made Investing in India Attractive

Modi has tamed inflation (down to 5% from 9%), trimmed bureaucracy, and cut regulations. He's also traveled the world making the case for investing in India.

"In late September, Modi spoke to a gathering of tech executives in Silicon Valley, becoming the firm Indian prime minister to speak in the U.S. in more than three decades," said Money Morning Defense & Tech Specialist Michael A. Robinson. "He invited more tech investments in India and touted a program that seeks to ensure government services are made available to citizens electronically by improving online infrastructure and by increasing Internet connectivity."

Modi's reforms and initiatives have energized India's economy and have U.S. companies lining up to make the most out of the country's growing contingent of consumers.

Here's a look at some stocks to buy now to profit from this trend...

Hi,
If i want to buy some stock in india which company i should invest.I am in Canada and got the information through money morning .com.I do not have any experience in buying stock or choosing it.