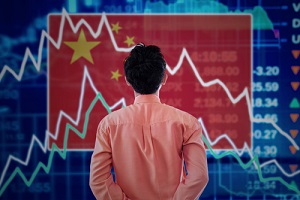 Provincial government officials in northeast China admitted on Monday that they falsified economic data over the past few years. The real numbers, they said, were much lower.

This same province claimed three years ago that GDP growth was at 9.5% when it was actually 2.7%. During that same time, the Jilin province reported 12% GDP when its growth rate was really 6.3%.

To make matters worse, China's yuan tumbled last Friday after the People's Bank of China announced it would move away from its peg to the U.S. dollar. The PBOC stated it would, instead, start measuring its currency against a basket of global currencies.

These little "surprises" from the Red Dragon are the sort of precipitating factors that led to "Black Monday" on Aug. 24: a fall in the value of the yuan combined with a weakened growth outlook.

So does yesterday's news that China's been cooking its books mean we should brace for another stock market crash?

But the West is looking at China's book-cooking admissions from the wrong angle...

This Is All Evidence That China Is Growing Up

"China doesn't have the exclusive rights on manipulating numbers. It's called accrual accounting and it's done everywhere," Fitz-Gerald explained on Dec. 14. "The fact that they're coming clean is a great development because it clears the path to profits much the same way similar revelations did in this country in the late 1800s and early 1900s."

Fitz-Gerald goes on to explain that Monday's admission was a great show of transparency on China's part - and a sign of maturity.

And we shouldn't look past that.

"Would you rather this kind of behavior continue and no one make note of it?" he posed.

Instead, the takeaway here, Fitz-Gerald suggests, is this...