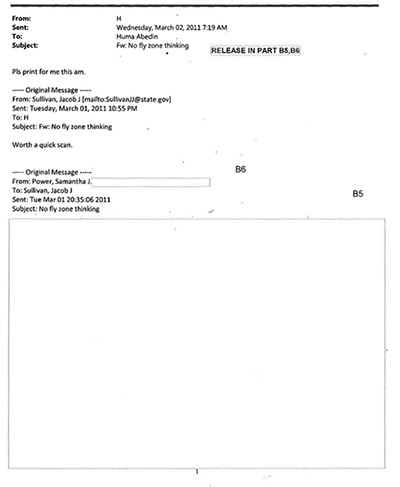 The first email to highlight Clinton's indifference for national security came in the form of a request she sent to Abedin. Clinton asked her former aide to print out two March 2011 correspondences between Jake Sullivan – her former chief of staff – and former British Prime Minister Tony Blair. Sullivan had also used a non-state.gov account at the time. The State Department redacted a good portion of information from these particular messages because they contained "classified information," reported Judicial Watch. 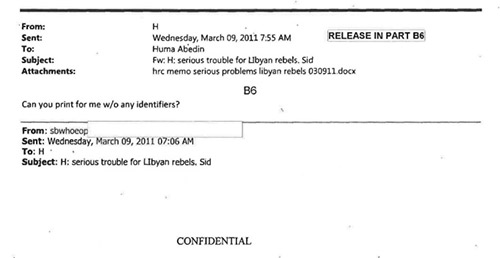 Another email released today revealed that Clinton wanted to know how her meeting schedule in Washington, D.C. – including a four-hour conference concerning the situation in Libya – would impact her vacation in the Hamptons. In response to Abedin's Aug. 26, 2011, rough estimate of what her day would look like, Clinton asked, "Ok. What time would I get back to Hamptons?" 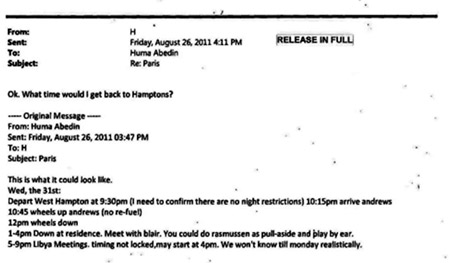 "These emails show that Hillary Clinton isn't the only Obama official who should be worried about being prosecuted for mishandling classified information. Her former top State aides (and current campaign advisers) Huma Abedin and Jake Sullivan should be in the dock, as well," said Judicial Watch President Tom Fitton. "The Obama State Department has now confirmed that Clinton, Abedin, and Sullivan used unsecured, non-government email accounts to communicate information that should now be withheld from the American people 'in the interest of national defense or foreign policy, and properly classified.' When can we expect the indictments?"

Do you think these Hillary Clinton emails qualify as evidence of a crime? Tell us your thoughts below!

Hillary Clinton is not qualified to be President. She sent and received highly classified information on her private email account and server. After being caught, and notified about 22 Top Secret emails and higher, she said that she wanted those emails made public. Can you believe that she was willing to sacrifice the safety of our nation in an attempt to justify her unbelievable actions. And lying about the Benghazi attack being caused by a video made in America was disgraceful. No – she is not qualified to be President!
Sincerely,
JAKE JACOBY

Some of our ex-presidents had and used their own e-mails while in office. How do we know if some were confidential or not. If that is the reason why Hillary shouldn't be President then we might not have anybody that is qualified to be President. We are only human and make mistakes.

Those type of mistakes would land most people in jail. If it was discovered while she was in office by the proper authorities. She Would Have Lost Her Job Because They Would Have Revoked Her CLEARANCES. Or that's what would happen to me or you. Evidently she dances between the raindrops.

Cynthia, doesn't her lying and complete disregard to national security mean anything? How can we look past these things and allow her to run for the highest office in America?

I agree 100% with John Jacoby! She is not qualified to be President! She and her aides should go to jail!!!