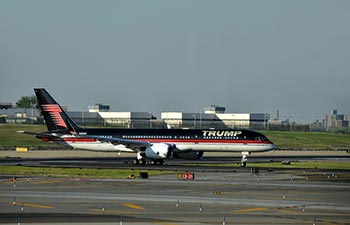 At least that's what the GOP front-runner promised attendees at a rally in South Carolina last night.

You see, the Palmetto State is home to one of Boeing's biggest manufacturing plants.

Trump warned voters that as soon as that plant opens its doors in China, it's "bye, bye, South Carolina."

"Be careful," he said, according to a Yahoo! News report this morning, because Beijing is "making Boeing build this massive plant in China" as a means to secure the metropolis' first-in-line position when more airplane orders need to be filled.

News of a Boeing factory going up in China first broke last September. That's when the aircraft manufacturer announced the finalization of orders from Chinese companies for $38 billion worth of airplanes, reported Forbes on Sept. 23. This list included:

Trump warned at the time that the Chinese plant would take jobs away from the United States.

"It won't happen if I'm president, by the way," he told the North Augusta, S.C., crowd last night. His declaration was met with exuberant applause.

Currently, the billionaire businessman maintains a massive lead in the Palmetto State, with a 42% favorability among likely Republican primary voters, according to the latest CBS News/YouGov data released Sunday. Texas Sen. Ted Cruz is in second place – well behind "The Donald" – with 20%.

If Donald Trump becomes president, we can expect his business acumen to affect U.S. policy. Find out more about the real estate magnate's business-to-politics plans by following us on Twitter @moneymorning, or like us on Facebook.

Coco Bonds Weren't Such a Good Idea… Back in 2010, regulators came up with a new type of bond just for banks – "contingent convertible bonds," or coco bonds. Under ordinary conditions, these bonds pay a higher than average return. But when a bank gets into hot water, it can convert the coco bond to capital – bad news for the bondholder. Here's why you've been hearing a lot about coco bonds and what all this means for the markets…