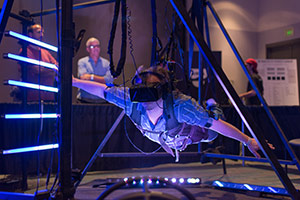 Despite the volatility, there's one big reason we are so bullish on this social media giant. In fact, we've found a new $150 billion catalyst.

But before I get to that, I want to make sure that Money Morning readers know why the Facebook stock price has been so volatile…

Members of the technology stock group known as FANG (Facebook, Amazon, Netflix, and Google) have been hit hard in 2016. FANG stocks have dropped an average of 9.78% this year, while the Dow Jones Industrial Average and Nasdaq are down 5.20% and 9.35%, respectively.

The slowing of the Chinese economy, volatile oil prices, and concerns that the federal government will enact negative interest rates are all contributing to the instability of the FB stock price right now.

Facebook stock has not been immune to the broad issues in global markets, and investors are concerned that the company may be in a tech bubble.

Recently, Stuart Varney of FOX Business even asked Money Morning Chief Investment Strategist Keith Fitz-Gerald if the tech bubble was about to burst.

Fitz-Gerald took issue with the word bubble, and he believes that the current sell-off is just an "unwinding."

Fitz-Gerald actually views this as a buying opportunity because Facebook is:

The Facebook Stock Price Will Climb Because of Oculus Rift

On Feb. 21, Facebook announced that it was going to form a "Social VR" (or virtual reality) team. This team will build technology that creates new experiences for Facebook users, according to Forbes.

But of course, Wall Street missed the bigger picture from this announcement…

Facebook has its own virtual reality platform, Oculus Rift, which was just made available for pre-order at the beginning of January. Rift costs $599 and will begin to ship in March. We believe that this will add a tremendous amount of revenue to Facebook's bottom line. And that's not even what has us most excited.

The bigger news is that Facebook announced at Samsung's Galaxy S7 event that it was going to build technology that creates new ways for people to have social experiences in virtual reality, according to Forbes.

Why is that so important? Virtual reality is becoming a new space for advertisers.

While establishing a profitable model from virtual reality advertising is still in its infancy, the early model for monetization is that advertisers will pay to sponsor an experience. The technology would allow you to simulate real-world interactions. You could virtually sit next to a friend or participate in an activity with them through Facebook, and an advertiser may be willing to pay to sponsor those interactions for branding purposes.

The Coca-Cola Co. (NYSE: KO) acted as an early adopter of the technology and its advertising in 2014. Coca-Cola created a virtual reality experience at the World Cup where users could visit a locker room and play on the field.

CEO Mark Zuckerberg expanding his reach into the budding industry is just one of the many examples of his forward thinking.

While virtual reality is mainly associated with games right now, he sees the technology being used well beyond games.

By 2020, research company Digi-Capital projects that the augmented reality/virtual reality market will bring in $150 billion in revenue. When you consider that Facebook has several outlets to make revenue through virtual reality, including Instagram, WhatsApp, Messenger, and its flagship site, there is a huge opportunity for the company.

And any dip in the Facebook stock price now makes it a great buying opportunity for long-term investors.

The Bottom Line: The Facebook stock price has been volatile in the last year because of broader market volatility. FB stock is not immune to sell-offs in the global markets, but it still has strong fundamentals and great leadership. CEO Mark Zuckerberg identified virtual reality as a huge catalyst for revenue growth, and he is building a strong foothold in an industry that is projected to bring in $150 billion in revenue in the next four years.