As you're reading this, I'm traveling to London and the annual high-stakes energy consultations at Windsor Castle.

As veteran readers of Oil & Energy Investor are aware, each year in early March I provide one of the private briefings at this event to a select international audience of energy figures, ambassadors, ministers, and high commissioners assembled at the castle.

The briefings are conducted under royal charter provided by the queen, with the British royal family in residence at Windsor Castle when the briefings occur. That Marina and I get to stay at the castle for three days is an extra perk.

Now, the meeting is conducted under Chatham House rules. That means no one in attendance can ascribe any particular position to any named individual. These rules are designed to allow for open and frank conversations.

Still, I'll have much to say on what transpires there when we return next week. Stay tuned.

But there's something I won't be telling them at the Windsor meeting. It's the "other shoe" dropping for the oil sector...

And it's going to affect each and every one of us...

Oil and Gas Company Bankruptcies Are on the Rise

This ripple effect will extend to much more than just oil and gas. And it looms as an ongoing concern, one that is likely to have a longer-lasting effect than the price of oil itself - unless, that is, there is a reversal of trajectory.

Crude oil prices took a rest yesterday after spiking up 13.9% over the six preceding trading sessions. Of course, having started from $29.04 a barrel for WTI (West Texas Intermediate, the NYMEX trading price set daily at Cushing, Okla.), the new level remains well below the level necessary for any appreciable increase in survivability for operating companies in the United States.

On the natural gas side, things are far worse.

Here, prices have fallen appreciably. The Henry Hub price (the location in Louisiana where NYMEX daily rates are calculated) closed Tuesday at $1.71 per 1,000 cubic feet (or million BTUs), matching the low hit last Thursday and the lowest price in almost a decade.

The Henry Hub price has now fallen almost 26% in a month.

Of course, both of these low price levels adversely impact the survivability of companies. It comes as little wonder, therefore, that bankruptcy rates are accelerating in the oil and gas sector. This is clearly demonstrated by one of the slides I'll be showing during my Windsor briefing later this week: 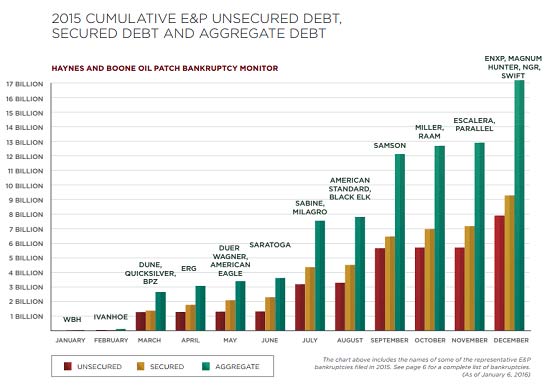 As you can see, the rate of bankruptcies among U.S. exploration and production (E&P) companies increased dramatically over 2015.

Yet both the price doldrums and the rising bankruptcies are precursors to a longer-lasting problem. This is the proverbial "other shoe" dropping. And it is a matter that adversely impacts a much broader range of services and expenditures...

Without Oil and Gas, Two Dozen States Are Now Struggling

Over two dozen states collect taxes from the activities of oil and gas producers. Some of these states - such as North Dakota, Oklahoma, Texas, Alaska, Pennsylvania, Arkansas, West Virginia, and even Kansas or Colorado - have budgets that have become heavily dependent on what the producers do.

Now, the plight of publicly traded companies, the ones we target in Oil & Energy Investor because any investor can buy their stocks and bonds, are a problem enough.

But the real crisis hitting state houses across the country comes from the thousands of private companies cutting back operations significantly. Here, the impact on everything from education to bridge repair, healthcare, and assistance for the elderly is becoming acute.

Just look at the following chart, from the U.S. Energy Information Administration (EIA), a division of the U.S. Department of Energy. It provides three examples of states most heavily dependent on oil and gas, but also indicates just what is transpiring only from "severance tax" revenue. These are taxes collected by states from producers and are based on volume at the wellhead. 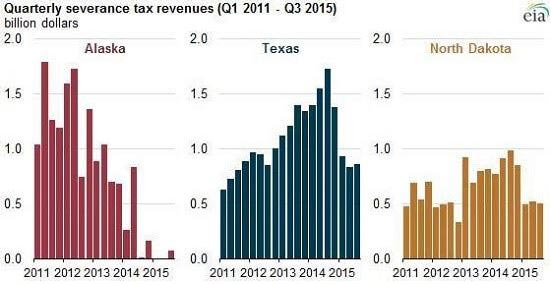 As you can see, severance tax revenue has been decreasing significantly. And these figures are only through the third quarter of last year.

Matters have become more acute since then.

This clearly indicates the impact of lowered oil and gas production on state revenue. But even that only points to a portion of the problem...

That's because, as production slows down, there is an expanding negative effect on business revenue for a much wider range of the "three S" (support, supply, and service) companies relying on ongoing contracts from the producers.

That, in turn, exacerbates the state (and local) revenue shortfalls.

In addition, the ripple effect depresses employment almost across the board. The employment drain is now more extreme than the decline in prices, as this next chart shows. 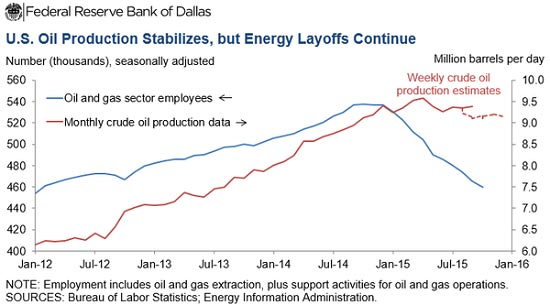 Once again, the situation is now worse than this graph from the end of December illustrates. The next shoe has already started to drop and it is likely to have a destabilizing impact on an entire range of public services.

As you've seen here, the export of U.S. liquefied natural gas (LNG) has finally begun and Congress has approved the export of crude oil after over 40 years of restrictions.

Don't be surprised if oil and natural gas exports from the United States ramp up as a way of supporting local tax bases and jobs. As you can see, there's now significant interest on the state and local levels in pushing for these exports.

For many parts of the country, the higher prices commanded by the global market may well become a lifeline to Main Street.

That means how you play energy companies will have to change. There will be some nice new opportunities here, once the commotion has blown over.

And stay tuned for next week, when I'll be bringing you as much insight from the Windsor energy conference as the rules will allow...

Why Oil and Stocks Have Been Dancing in Lockstep: Throughout crude's lengthy decline, stocks tended to mirror any movement in oil, especially to the downside. Common sense suggests some signals would affect both, but lately, they've instead been moving in almost lockstep connection. It seems common sense isn't in charge of the markets any more...