If these leaders get their way, it means that even if Trump is ahead in terms of votes, he could still lose the Republican nomination...

Exactly what is a brokered convention? (Not to be confused with a "contested convention," which is a different matter entirely.)

Put simply, a brokered convention happens when no single Republican presidential candidate has secured a "supermajority" of delegate votes by the end of the primary season.

A Republican candidate has secured a supermajority when he or she gets at least 50% of the delegates to pledge their support, plus one. In other words, the candidate needs 1,237 out of the total 2,472 delegates across the United States (50% + 1). These delegates are won through a state-by-state series of caucuses and primaries between February and June.

If a GOP candidate secures the supermajority, he or she automatically wins the party's nomination at the convention. And in fact, a supermajority has been won in every presidential cycle since the late 1960s, when nationwide primaries were officially instituted.

However, should none of the GOP presidential candidates finish the primary season with a supermajority, it sets off a "brokered convention."

Such an event has never happened in the modern era -- but in 2016, that could all change.

Right now, the GOP is staring down one of two scenarios: 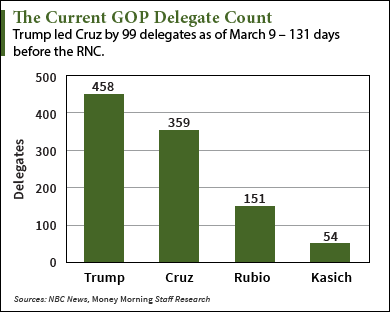 Here's a look at the current delegate count...

Currently, Trump's 458 delegates translates to roughly 44% of those awarded thus far (1,022). This gives him the majority of the delegates - but not the supermajority.

However, there are 1,452 delegates left. While Trump is still 779 delegates (63%) short of the required 1,237 for that supermajority, there's still a good chance he could make it. Victories in Florida and Ohio -- which are "winner-takes-all" states worth 99 and 66 delegates respectively - would help him toward a supermajority.

Should Trump indeed sweep Florida and Ohio, he would still need 52% of the remaining delegates to reach 1,237 by convention time. 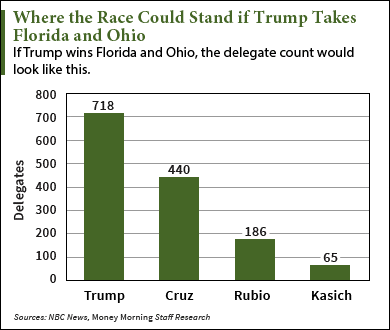 That's still a tough task, with his rivals snapping up wins in various states...

On March 6, The National Review pointed out that Trump might not get to that 1,237 for myriad reasons - his debate antics, his flip-flops, and the consolidation of the GOP field working against him. Consider what happened in Louisiana, a state where Trump's final lead in the average of all polls surveyed by RealClearPolitics was 15.6% of the vote. He wound up winning by three points, only because he carried early votes with 47%. Ted Cruz won 23%, and Marco Rubio won 20%. Of the votes cast on Election Day, Cruz beat Trump by 40.9% to 40.5%.

A scenario like the one that played out in Louisiana could repeat itself out across the country as the primaries and caucuses continue - hindering Trump's path toward a supermajority nomination and making a brokered convention all the more likely.

Now, here's how a brokered convention would play out on July 18 -- a first in modern-era politics and what would mark one of the most controversial dates in American presidential history...

What a Brokered Convention Would Look Like in Election 2016

Every Republican presidential convention is initiated by a "first ballot." At this time, just over 85% of the 2,472 delegates who vote will be bound to support the candidate to whom they originally pledged during primaries.

If there's no winner after this first ballot -- no candidate with a supermajority of the votes -- then the convention officially becomes "brokered."

Suddenly, delegates will be free to vote for whomever they like, no matter their pledges of support during the primaries.

Including someone who didn't run in the election cycle, like, for instance, former Massachusetts Gov. Mitt Romney, or Speaker of the House Paul Ryan.

Both of these individuals have had their names tossed about by the media lately as possible candidates to emerge amid a brokered convention. The one technical problem in this situation is the fact that currently, Republican Party rules require candidates to have won eight states to get the nomination. This rule is called "Rule 40" and was enacted just prior to the 2012 Tampa Republican Convention. It states:

Each candidate for nomination for President of the United States and Vice President of the United States shall demonstrate the support of a 40 of 42 majority of the delegates from each of eight (8) or more states, severally, prior to the presentation of the name of that candidate for nomination. Notwithstanding any other provisions of these rules or any rule of the House of Representatives, to demonstrate the support required of this paragraph a certificate evidencing the affirmative written support of the required number of permanently seated delegates from each of the eight (8) or more states shall have been submitted to the secretary of the convention not later than one (1) hour prior to the placing of the names of candidates for nomination pursuant to this rule and the established order of business.

However, according to RealClearPolitics, delegates will have multiple opportunities to change or even nix the rule from the RNC's list before the convention rolls along this July - much like they changed it before the Tampa showdown. RNC leaders have shown displeasure in the present election cycle over the idea of Trump as their party's nominee, making a convenient rule change all the more plausible.

Regardless, once a convention becomes officially brokered, the delegates go on talking, negotiating, and voting until the second ballot. The candidate with the most votes at the second ballot wins the party's nomination -- regardless of whether he or she was the top choice of the American voting public.

Drowning in a VAT of Debt: While the Ted Cruz tax plan has several features that would promote economic growth, it also has an Achilles' heel that could severely undermine its benefits. Here's a look at what the Texas senator has in mind...

He already found a way to scare the living daylights out of some holocaust survivors with his pledge to vote for him, that he's now compared to Adolf Hitler for some members of the Jewish community. There was such a post on FB two days ago. There's even an ironic publicity on him that passed on FB as well. Super majority ?