The rapid rise of a new cryptocurrency called Ethereum has fueled speculation that the incumbent Bitcoin now has a rival with the potential to sweep it aside.

That's not what's happening, but it's easy to see why some might believe it.

Ethereum only went live last August, but quickly stood out in the crowded world of hundreds of digital currencies, all based in whole or in part on the open source Bitcoin code. 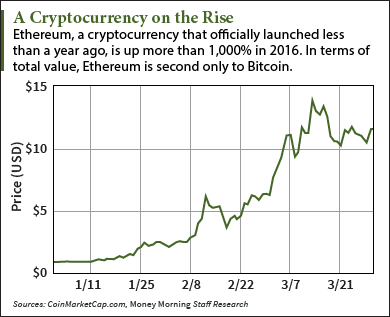 Today, the total value of all existing digital "ether" - the name of the individual units on Ethereum - is about $900 million - second only to Bitcoin's $6.5 billion.

But it's not just the steep appreciation in value that has painted Ethereum as a possible Bitcoin rival...

The new kid on the block is also getting a lot of attention from prominent tech and financial companies. Many businesses have come to realize the disruptive power of the technology that underpins all cryptocurrencies, the blockchain, and are seeking to tap it themselves.

So does Microsoft Corp. (Nasdaq: MSFT), which has adopted Ethereum for use in its Azure cloud business. Microsoft even has a special name for it: Azure Blockchain as a Service (BaaS).

On Jan. 11, banks tested a transaction settlement system that used Microsoft's Ethereum-based technology. The test group is part of a worldwide consortium of 42 major financial institutions working with software company R3 to find ways to use blockchain technology to streamline financial services.

The sudden popularity of Ethereum - and the fact that several big companies have chosen to use it over Bitcoin - has fed the thinking that the two are in a competition and that Bitcoin is losing.

But the idea that they're rivals is a misconception fanned by the media. Here's what they're getting wrong...

Why Ethereum Is Not a "Bitcoin Killer"

Just 22 years old, the mastermind of Ethereum is already a giant in the world of cryptocurrency. Vitalik Buterin was born in Russia in 1994 and moved to Canada in 2000.

At 17, Buterin discovered Bitcoin. His fascination with the cryptocurrency led him to co-found Bitcoin Magazine in September 2011. After entering the University of Waterloo in 2012, the 18-year-old Buterin suddenly left to go on a six-month world tour. That trip, and his ongoing study of cryptocurrencies, inspired him to create Ethereum.

Buterin currently serves as chief scientist for Ethereum and resides in Zug, Switzerland.

Like Bitcoin, Ethereum is a cryptocurrency that exists only in digital form. And both are based on a blockchain, the digital ledger that tracks all transactions.

But Ethereum was designed to serve a different purpose than Bitcoin. It's the brainchild of a 22-year-old Russian-Canadian named Vitalik Buterin. Fascinated by Bitcoin, Buterin recognized that the blockchain technology could be used for far more than transferring value in the form of bitcoins.

You see, a blockchain is a trusted public digital ledger, with transactions verified over the Internet by computers "mining" new coins. But what makes the blockchain so useful is that it can contain any type of data in addition to the value of the cryptocurrency. That includes ownership of property, such as real estate or stocks, as well as voting data, trademarks, proof of authorship, and more.

This property makes blockchain tech very good at tasks like settling transactions (such as stock trades) very quickly and efficiently.

But Bitcoin was created to serve primarily as a decentralized digital currency, beyond the control of governments or central banks. The blockchain was a means to that end, and so wasn't developed as fully as it could have been.

With Ethereum, Buterin set out to create a cryptocurrency with a much more robust blockchain than the one Bitcoin is built upon. Instead of just being able to store and verify data, Ethereum's blockchain can actually run programs.

In geek-speak, Ethereum is what's known as "Turing complete," which essentially means it can function as a computer. In fact, Ethereum's developers refer to it as a "world computer."

This means that Ethereum can run smart contracts and "distributed applications."

A very simple example of an Ethereum smart contract is a sports bet between two parties. Both entrust their money to a program that will reward the winner after it receives the results of the contest from a trusted source, such as ESPN or the Associated Press.

But frankly, the programmability of Ethereum means limitless possibilities.

This advanced capability is why companies like Microsoft, IBM, and JPMorgan prefer Ethereum's blockchain to Bitcoin's.

But the focus on programmability also means Ethereum is less useful as a digital currency than Bitcoin...

How Bitcoin and Ethereum Will Co-Exist

Designed specifically as a digital currency, Bitcoin is better at storing and transferring value than Ethereum. In particular, Bitcoin has more scarcity built in, as only 21 million will ever be created.

When Buterin launched Ethereum last August, he sold 60 million "ethers" (all were purchased with Bitcoin). The Ethereum mining system meanwhile creates five more ethers per block mined (about every 15 to 17 seconds), or about 18 million per year.

But rather than serve as a store of value, Buterin calls ether the "fuel" for the programs Ethereum runs. To use Ethereum, you need to spend ether "gas." It ensures hackers can't waste network resources, but isn't really intended for use outside the system.

With that in mind, it makes more sense to view Ethereum and Bitcoin as partners rather than rivals.

"Ethereum would never be possible without Bitcoin - both the technology and the currency - and we see ourselves not as a competing currency but as complementary within the digital ecosystem," the FAQ on the Ethereum website explains, suggesting several ways to use Bitcoin with Ethereum.

So the whole storyline about Ethereum "toppling" Bitcoin is a media fantasy. A rivalry might seem sexy, but the reality - that these two cryptocurrencies will work together to transform how the world conducts its business - is one of the biggest tech stories of the 21st century.

The Bottom Line: Ethereum is the rising superstar of cryptocurrencies, but that's not the disaster for Bitcoin many in the media are claiming. Designed for different purposes, Ethereum and Bitcoin actually complement each other. Together these two cryptocurrencies will revolutionize how humans conduct business with each other.

Don't Underestimate the Smaller iPhone: When Apple unveiled a new 4-inch iPhone, both tech pundits and Wall Street yawned. But the iPhone 5SE is a clever product move that's part of a larger Apple strategy. And it's a strategy that is destined to pay off in a big way over the next couple of years...

You forgot to mention that a Ethereum is a quantum leap ahead of Bitcoin in smart contractual computation and it has turning-complete programming capability baked into the block chain at the protocol level. Bitcoin is like a octet calculator at this point and Ethereum is more akin to a smartphone. It is essentially the first decentralized world computer in its infancy. Yah nothing special.