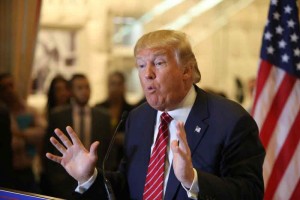 It looks like GOP front-runner Donald Trump is going to score the party's nomination.

Yes, we are mostly beyond wondering whether the billionaire businessman will secure the nomination. It's now time to look ahead to who Donald Trump's vice president might be.

A number of big-name politicians have been brought up by the media as potential Trump running mates.

1. New Jersey Gov. Chris Christie: Ever since his surprise endorsement of Donald Trump, Christie has been the obvious choice for VP. He's since become one of Trump's most trusted advisers, NJ.com reported on March 25.

"Christie is clearly making the transition from endorser to enabler and positioning himself to be a major player in the Trump camp," David Kennedy, a presidential historian, told NJ.com.

However, when Christie was asked last Friday if he was vying for Trump's VP position, he acted incredulous. According to NJ.com, Christie's spokesman refuses to address the issue as well.

2. Former Minnesota Gov. Jesse Ventura: On Aug. 12, 2015, Ventura said he hopes Donald Trump wins the Republican nomination. He also added that he'd like Trump to consider him for the position of VP.

"Do you think Donald would ever think of asking me?" Ventura asked in an interview on his "Off the Grid" show, cohosted by former Trump adviser Roger Stone. The former WWE star went on to describe how he shocked his own staff by coming to work and saying, "You know what? As far as the Republicans are concerned, I hope Trump wins."

Ventura also explained that he is neither Republican nor Democrat, insinuating that this makes him somewhat similar to Trump.

3. Former Speaker of the House Newt Gingrich: Gingrich hasn't officially endorsed Trump. But he certainly gushed over the real estate mogul in a March 23 interview with Slate:

"He is very much somebody who has been good at business. And he listens well. He outlined the campaign as he saw it. I think he did a good job listening. He occasionally asked clarifying questions. He was very open to critical advice. I am not going to get into details, but I will say my overall impression was that in that setting he was totally under control as a guy who has done a ton of business and knows exactly how to operate in [a political setting]." 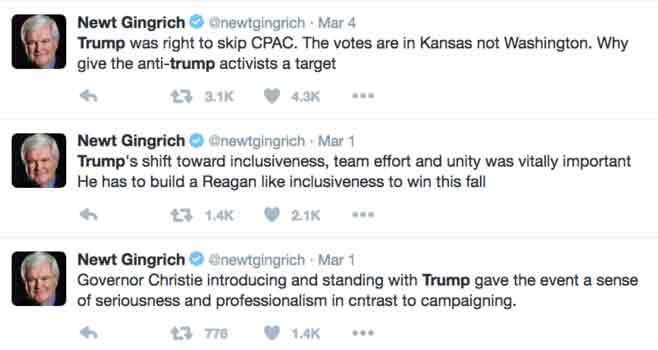 4. Florida Gov. Rick Scott: Scott has been on many a pundit's VP shortlist since Trump announced his presidential bid on June 16, 2015. Like Trump, Scott had no prior political experience before running for office. Still, he managed to win the gubernatorial vote in the Sunshine State.

Scott drew particular attention to himself and the notion he'd make a good Trump running mate on Jan. 7, when he penned an op-ed in USA Today praising the real estate mogul. The article, composed well before any primary vote was cast, stopped just short of an official endorsement. But Scott's message was clear: He's a fan.

5. Nobody: This idea was introduced by The Federalist on Monday. And the site makes a good point:

"Trump is a completely different candidate whose brand is that he is willing to shake things up. While the vice presidency used to be an office that had at least a little prestige, the 12th Amendment pretty much put the kibbosh on anything truly interesting coming out of an Electoral College vote. Why not shake up the whole idea of a running mate?"

Rick Scott should be the running mate, cause he could show Trump how to plead the fifth when he is jailed for stealing.

I like Rick Scott the best it would rid florida of a medicare thief and our worst governor ever.

Guest
Troy Hay( President of the Western States of America 2016-)

I don't even know why Jesse Ventura is even a choice! He is psycho! Rick Scott is a Mess-up! I like Chris Christie, but I think Michele Bachmann would be a great Vice Presidential pick! She is a woman, intelligent, hard-working, willing, capable, pretty and skillful!

I THINK A WOMAN WOULD BE A GOOD RUNNING MATE.POSSIBLY THE GOVERNOR OF NEW MEXICO RO SOUTH CAROLINA…