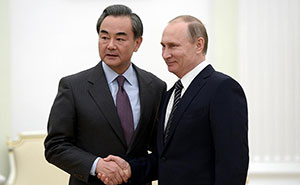 Russia and China teamed up to issue a stern warning to the United States today.

At a joint conference, Russian Foreign Minister Sergei Lavrov and his Chinese counterpart, Wang Yi, both called on Washington to halt installation of the Terminal High-Altitude Area Defense, or THAAD, system in South Korea.

THAAD is capable of shooting down short-, medium- and intermediate-range ballistic missiles - all weapons that North Korea purportedly has been testing.

Despite endorsing the United Nations Security Council sanctions against North Korea on March 2, China and Russia see the U.S.' deployment of THAAD as exceeding what is necessary to defend against any North Korean threat.

"Relevant countries shouldn't use Pyongyang's acts as a pretext to increase their military presence on the Korean Peninsula," Lavrov said during the conference, according to CBS News today.

It warned U.S. soldiers to stop what it called "hooliganism" at the inter-Korean border village of Panmunjom.

If American soldiers don't cease this behavior immediately, North Korea warned, they'll meet a "dog's death any time and any place," according to FOX News this morning.

The U.S. and South Korean militaries had no immediate official responses regarding these accusations.

The Panama Papers Saga Continues: The International Consortium of Investigative Journalists revealed that it has a lot more to unveil about the world's elite and their shady financial dealings. Much more. Only this time, the group of journalists will unleash its information on the public in a new revelatory format...

The United States Of America still has a pact from the Korean war. China and Russia can go pound sand !