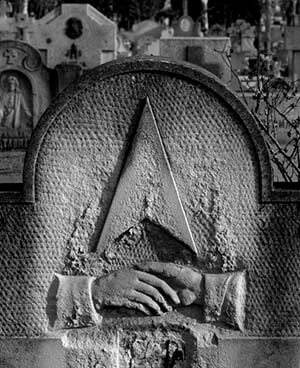 One of America's most infamous secret societies, Yale University's Skull and Bones, may be a little less secret soon…

Someone is trying to "unlock their vault."

The National Archives, which oversees White House records stored at the Bush Library in Dallas, Texas, reportedly received a request on April 15 for materials specific to George W. Bush's presidency under the Freedom of Information Act. The request specifically seeks records consisting of 8,072 pages, 3,159 assets (such as presidential memoranda – cards, letters, etc.), and one video clip to be reviewed for release to the public.

About Skull and Bones

Skull and Bones was co-founded at Yale in 1832 by William Huntington Russell and the father of a future president, Alphonso Taft. The society's alumni boasts many of America's political elite, including former presidents William Taft, George H. W. Bush, George W. Bush, and current Secretary of State John Kerry. On April 26, Democratic presidential front-runner Hillary Clinton was made an "Honorary Bonesman" because she graduated from Yale Law School in 1973.

However, after having been thoroughly examined by both the National Archives and Records Administration (NARA) and former President George W. Bush himself, several of these items proved restricted under the Freedom of Information Act's 44 U.S. Code § 2204. This code limits access to presidential materials based on their containment of sensitive information (think national security secrets, trade secrets, and confidential communications).

In other words, still a significant amount of never-before-seen material.

The notice the National Archives received didn't specify who was requesting the files. But according to a report released by Politico earlier today, Robert Gaylon Ross, Sr., apparently did the asking.

Gaylon Ross is the author of several books about secret societies, such as the Bilderbergs, the Council on Foreign Relations, the Trilateral Commission and, of course, the Skull and Bones Society.

That's Not an Airport, That's a Swastika: The Denver International Airport opened its runways on Feb. 28, 1995 – about 16 months behind schedule and nearly $2 billion over budget. Suspicions swirled over the $4.8 billion price tag, its sheer size, and the fact that it was shaped like a Swastika…