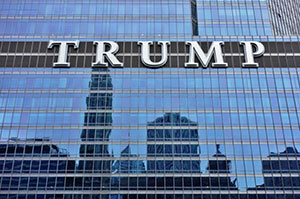 The Trump Tower in Chicago, Ill.

Speculation over exactly how much Donald Trump is worth deepens...

On Tuesday, the "Trump net worth" debate was reopened after the GOP presumptive nominee filed his Personal Financial Disclosure (PFD) forms with the Federal Election Commission (FEC). This was Trump's second annual filing since he announced his candidacy for president on June 16, 2015.

The real estate mogul likewise made a big announcement about the disclosure on his personal website, touting the following earnings:

However, Forbes Media, which has tried to keep tabs on "The Donald's" fortune for over three decades, maintains a very different sum...

He explained how they arrived at this lower valuation:

Essentially Forbes was saying that Trump assigns a large - and seemingly arbitrary - dollar sum to his personal brand, which shouldn't be counted when one actually calculates net worth value.

Evidence of Trump's more arbitrary method of valuation was present in a form provided by the billionaire last June...

According to Forbes, his real estate items, Trump Tower and 40 Wall Street, were both listed as simply being worth "over $50 million."

"Rather than include a theoretical value of personal goodwill," Forbes reported yesterday, "[we] capture Trump's brand through the deals he's able to make using his personal cachet and the estimated market value of the company he uses to license the Trump name to the world."

How Donald Trump Made Fools of the Pundits: It's not only possible, but probable that Donald Trump will shock the world by winning the White House this fall. Such a prediction defies conventional wisdom at the moment. But Trump has an advantage that the political pundits have completely missed...