Microsoft stock not only has the potential to get to $60, says Money Morning Capital Wave Strategist Shah Gilani, after it gets there, it will keep going.

That's not a popular view on Wall Street, at least not lately. After a relatively weak Q3 earnings report a month ago, Microsoft Corp. (Nasdaq: MSFT) stock has tumbled more than 9%.

Today (Thursday) the MSFT stock price is about $50, while it was over $56 back in mid-April.

Gilani is going against the grain, but he's done that before with Microsoft stock. And the last time, back in July of 2013, he was right.

MSFT stock gained about 80% from Gilani's call in 2013 until the first quarter of this year.

With analysts again doubting Microsoft, Gilani sees a fresh opportunity. That's why Microsoft is the Money Morning Pick of the Week.

Let's dig into the details…

Microsoft Corp.: About the Company

The behemoth that is Microsoft started out as an idea spawned when friends Bill Gates and Paul Allen saw an article on a personal computer, the Altair 8800, in the January 1975 edition of Popular Electronics. They won a contract to write software for the machine and founded "Micro-Soft" in Albuquerque a few months later.

Microsoft next wrote several programming languages, including a version of BASIC that they sold to RadioShack and a young Apple Computer (Nasdaq: AAPL). Microsoft's reputation grew quickly. By the end of 1978, the company had 13 employees and $1 million in revenue.

But the turning point for Microsoft came in 1980 when it convinced International Business Machines Corp. (NYSE: IBM) to license, rather than buy outright, the operating system (MS-DOS) that would run all of IBM PCs and their clones. It was a deal worth billions in future revenue.

In 1985, Microsoft introduced a graphic shell for DOS called Windows, which eventually came to dominate the personal computer market. Microsoft had its IPO in March 1986. The stock more than tripled within a year.

Around the same time (1986), Microsoft developed Microsoft Works, the precursor to Office. By the early 1990s, PCs running Windows and Office had become a standard, with Microsoft earning licensing fees from every sale. By 1990, annual revenue reached $1 billion.

The company ran into trouble starting in the late 1990s, however, with antitrust lawsuits from the U.S. government, individual states, and the European Union. The distraction hampered innovation and left the company ill-prepared to deal with the mobile revolution launched by Apple's iPhone in 2007.

The Microsoft stock price stagnated during the 14-year tenure of CEO Steve Ballmer, who had joined the company in 1980.

But the arrival of CEO Satya Nadella in 2014 initiated a philosophical shift toward cloud and mobile, with less reliance on the old cash cows of Windows and Office.

What You Need to Know About Microsoft Stock 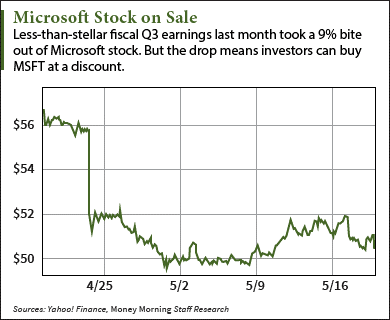 In its first 14 years, MSFT stock soared more than 58,000%, peaking at the end of 1999 at the height of the dot-com bubble. But in the dozen years after that, Microsoft stock went sideways – earning a reputation as a laggard.

Nadella's arrival helped reinvigorate MSFT stock, as noted earlier. But the impressive three-year run slowed at the end of 2015, and the stock has seemed stuck.

Now investors are trying to figure out whether Microsoft stock has any more gas left in the tank. And the Q3 earnings, which included lowered guidance for the current quarter, seemed to confirm the fears.

Why MSFT Stock Is a Buy

Microsoft has been making all the right moves, Gilani said.

He likes the company's push into the cloud, its progress on mobile, and its Windows 10 strategy.

"Success here will propel Microsoft back into the mainstream discussion about dominant tech companies," Gilani said. "And don't forget, Microsoft is still the world's biggest software maker, and it's sitting on $103 billion in cash."

He believes Microsoft will continue to make headway in its fight with Amazon.com Inc.  (Nasdaq: AMZN) to dominate the cloud. It's already one of Microsoft's fastest-growing businesses.

And unlike many observers, Gilani thinks Microsoft will continue to gain ground in mobile.

"Their share of mobile at 2% at the end of 2015 jumped to 4% at the end of the company's latest fiscal quarter. That's a big jump in a short time and tells the world they're coming," he said.

Where Microsoft is trading now – about $50 – is just below the entry point of $50.50 that Gilani prefers.

He suggests investors watch the stock and try to create an opening position at that price or below. If trouble hits the markets, causing MSFT stock to drop a few dollars lower, Gilani says investors should exploit the opportunity to buy more shares.

As for his $60 price target, Gilani says Microsoft could get most of the way there quickly if the market shakes off its jitters and starts moving up again. As for downside risk, he says there's strong support at $48, $46, and $44.

Once Microsoft stock gets to $60, it will continue to go higher, but "at a more leisurely pace," Gilani said.

Finally, he pointed to the 2.8% dividend yield, which will fatten returns along the way.

Our Previous Pick of the Week: Microsoft isn't the only tech titan on sale right now. One of Microsoft's chief rivals has suffered even more in the stock market this year. But as with Microsoft, the critics have failed to take a long view. Find out why this stock is "the long-term bargain of the year"…