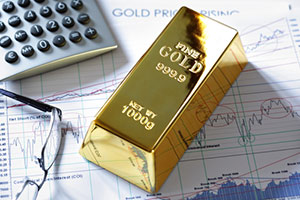 After a month-long decline, the gold price today (Tuesday, May 31) is seeing a slight rebound.

Shortly before noon, gold prices were up 0.8% to $1,215.50. That comes after prices saw their worst week since November, posting a 3.5% weekly decline and closing at their lowest since Feb. 22.

With today's gold price gains, investors want to know if the yellow metal will finally rise out of its recent slump.

Before we discuss the four factors that will move the gold price in 2016, here's the biggest reason why it has cratered over the last month…

Gold Price Today Is Up, but This Factor Pulled Prices Lower Recently

You see, several U.S. Federal Reserve members have been making cases for a rate hike at the next FOMC meeting on June 14-15. On Friday, May 27, Fed Chair Janet Yellen said an interest rate increase is an appropriate move as the economy and jobs market continue to grow.

However, markets are still placing low odds – 34% – on a rate hike in June. The Fed will likely hold off on a raising rates due to concerns over the UK's possible withdrawal from the European Union. This "Brexit" vote will take place the week after the upcoming FOMC meeting on June 23.

On the other hand, the chances of a July interest rate hike are rising…

The odds of a rate boost at the July FOMC meeting have risen to 64%. Still, analysts think Yellen won't raise rates since there's no press conference after the July meeting, and Yellen won't be able to explain her move.

Since higher rates boost the U.S. dollar and make dollar-denominated gold more expensive to foreign buyers, the rate hike chatter has prompted investors to sell their positions. According to the Commodity Futures Trading Commission, net long positions in gold futures and options fell 26% to 169.491 contracts in the week ending May 24. Gold-backed exchange-traded fund (ETF) holdings fell 2 metric tons last week – the first weekly decline in more than a month.

Despite the recent decline, we're still bullish on the gold price today and in 2016.

Three reasons why the gold price will gain momentum are the use of negative interest rates, incompetence of central banks around the world, and worries of slowing global growth.

But the biggest – and most profitable – reason why gold prices will rebound in 2016 is the glum outlook for U.S. stocks.

According to last week's survey by the American Association of Individual Investors, sentiment that the stock market will rise through November fell to 17.8%. That's the lowest number since 2005.

Investors are already acting on this bearishness. In fact, Thomson Reuters Lipper research shows they've yanked a net $35.3 billion from mutual funds so far this year.

Some analysts said investors are still rattled from the stock market crash earlier this year. The Dow Jones Industrial Average slumped 5.5% in January – the worst performance for the month since 2009. On Feb. 11, the index hit its lowest level since November 2013.

These volatile periods are when gold becomes most effective. That's because gold is a store of value and a hedge against downturns in the market. In other words, it's your portfolio's insurance against unforeseen crises.

The most convenient way to play the gold price today is with ETFs. That's why we're recommending the SPDR Gold Trust ETF (NYSE Arca: GLD).

With a huge $33.6 billion market cap, GLD is the biggest gold-backed ETF in the world. The fund offers investors a cost-efficient and secure way to make money from the gold market.

GLD trades just like a stock. The value of GLD directly relates to both the value of the gold held by the ETF and fluctuations in the price of gold. According to FactSet Research Systems Inc. (NYSE: FDS), more than $1.1 billion was invested into the fund in the first week of March alone. That was the largest amount poured into any ETF that week.

The Bottom Line: Although gold has declined in recent weeks, the gains in the gold price today show more room to run higher in 2016. Interest rate policies and slowing global growth are the main reasons to buy gold, but the most profitable reason is slipping faith in the U.S. stock market. To position yourself for returns from falling stock prices, we recommend investing in the SPDR Gold Trust ETF.

Fixing Our Financial Mess Needs to Be Our Next President's Top Priority… Our next president is set to inherit a big economic mess. With over $19 trillion in debt and exploding spending costs, the U.S. is on an unsustainable economic path. However, our situation can be fixed. But there's one thing our next president must absolutely tackle right away…