I just about fell out of bed last week when I rolled over to scan the first of hundreds of headlines I look at when my day starts, and saw this from IBTimes:

Not that I'm surprised somebody else finally caught on and called the one-time media darling for what it is, only that it's taken so long for everybody to glom on to what we've been discussing since the company IPO'd in 2013... and used almost the exact language I have to describe the situation since.

But, there's something else you should know.

It's a shocking "secret" that most investors will never understand: The numbers have never lied, and when it comes to much bally-hooed companies like Twitter Inc. (NYSE: TWTR), they never do.

That's what we're going to talk about today.

As always, I'm going to give you a viable alternative and suggestions on the tactics you need to make the jump.

Media Darlings Are Almost Never What They're Cracked Up to Be 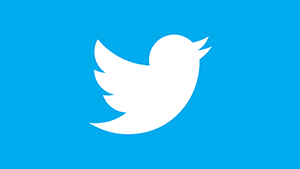 Let's backtrack for a minute so that I can make my point.

...founder Evan Williams became a billionaire out of the gate.

...Richard Costolo, who drove the company to its IPO, made a cool $192 million.

...the venture firms who participated in Twitter's six funding rounds made at least $574 million.

...the underwriters, including Goldman Sachs, Morgan Stanley, JPMorgan Chase, Bank of America, Merrill Lynch, and Deutsche Bank (among others), made tens of millions.

...even the lawyers made bank.

You'll notice individual investors aren't on that list. They never are, because IPOs really are the preserve of the ultra-rich. So unless you've got the connections, all you're left with is the risk because you're last in line when a company goes public.

Don't get me wrong, IPOs can work out in the short term for traders, but only if you're nimble, have solid risk management in place, and are prepared to lose everything you've put in.

But if you're an investor, the story is very, very different.

The same bunch of folks I just mentioned is counting on one thing and one thing only... being able to sell you the shares they've purchased at heavily discounted rates prior to the IPO, except at a much higher price down the line. So they put the media machine into overdrive, creating hype, daring-do, and hope.

By all accounts they were fabulously successful, ultimately driving the stock to a post-IPO high of $69 per share in December of 2013. But that doesn't change the fact that illusion only lasts so long.

Hope is not a viable investment strategy and it never has been for any company. So you'd best sort that out in a hurry using good old-fashioned numbers to cut to the chase.

Forget that we're talking about Twitter here for a moment and ask yourself if you'd invest in a company that's reported the following:

Not unless you're a sucker for hard luck cases.

Twitter's stock performance looks like the Titanic on its way to the bottom. 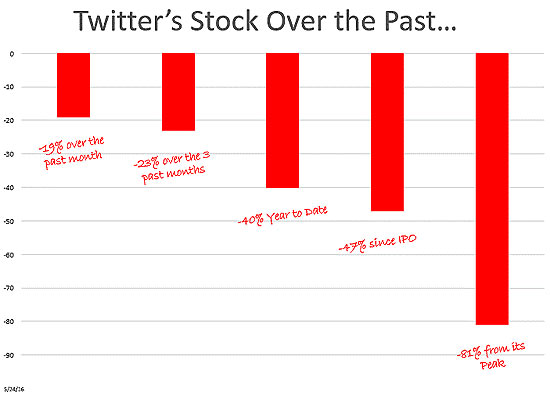 The situation reminds of Enron, or BlackBerry.

Both were once go-to companies in their respective industries and yet fell from grace amidst terrible numbers, destroying the retirement dreams of way too many investors who fancied themselves smarter than the markets.

Still, the faithful will not give up. #Goodluckwiththat

A quick skim of the chat boards reveals that there's "hope" that two-time CEO Jack Dorsey can turn things around with longer tweets, the ability to re-tweet, and potentially allow as many as 10,000 characters in tweets that have been limited to 140 characters so far.

In the coming months, we're introducing new ways for you to express even more with a Tweet:

The company doesn't have months to make a difference, let alone reverse the downward spiral it's entered.

What users really want is a simple "edit" button, and they want it now.

User Alex Heath summed things up nicely with a tongue in cheek observation:

Twitter in 2026: Good news, you can edit tweets AND we've fixed harassment/bullying!

Then there's the brain drain.

Executives continue to flee the company.

The company has engaged in a systemic program of expansion from the very get-go. I haven't always been crazy about the company because there didn't seem to be a method to the madness until recently. But I've never questioned the forward direction it's travelling.

Team Zuckerberg has hit revenue records regularly, and the stock is up 140.73% since Twitter IPO'd.

Those are the numbers you want for two reasons:

Tactically, there are a few things to think about if you're caught in the middle on this one, but still want to play along:

At the end of the day, I'm with Michael Nathanson of MoffettNathanson, who noted succinctly to clients last Tuesday according to IBTimes that the small "likelihood of a meaningful payoff doesn't justify owning [Twitter] here" - meaning even at these seemingly depressed levels.

Twitter is at best a buyout candidate and at worst a flameout a la Polaroid.

Editor's Note: The first rule of investing is not to lose money through Wall Street darlings like Twitter - but Total Wealth is about much more than avoiding losses that burn most investors. That's why Keith has identified through his 35 years navigating markets six "Unstoppable Trends" so powerful that nothing can derail them - and Keith sees 420% upside in just one of them by November. To access the free report on how to profit from election chaos no matter who wins, sign up for Total Wealth here - it's completely free!