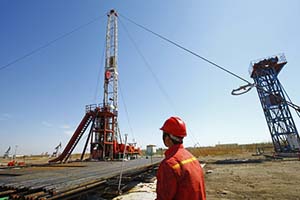 Crude oil prices are in focus as the U.S. Energy Information Administration plans to release its 23rd weekly oil inventory report of the year. Oil prices are now up at a 10-month high, fueled by concerns about supply in Nigeria, Canada, Venezuela, and Libya.

Dow Jones futures projected a 30-point gain at open despite market weakness in Europe and Asia this morning. Weak Chinese trade data for the month of May raised concerns about the sustainability of the nation's economic resilience. China's weakness was evident this morning when the World Bank announced that it had slashed its projected growth outlook for the global economy.

The World Bank now says the global economy will grow by 2.4% this year. That's down from its previous forecast of 2.9%.

Democratic presidential candidate Hillary Clinton offered her victory speech for her party's nomination after crossing the official line needed for total delegates. She is the first female presidential candidate to ever top a major party ticket. The announcement came after she won three big primaries on Tuesday and remains the projected winner in California.

On Wednesday, all eyes will be on Alphabet Inc. (Nasdaq: GOOGL). The technology giant will host its annual shareholders meeting today, where a number of key questions will be in focus. The company's leaders should anticipate questions about changes in management, the future of Nest, and other challenges.

On the deal front, shares of Polycom Inc. (Nasdaq: PLCM) are in focus on news that the digital video conferencing firm has received a takeover offer from a private-equity firm. According to reports, the offer is worth $12.25 per share. The firm's board, however, appears to be in greater support of an existing deal from Mitel Networks Corp. (Nasdaq: MITL).