My list of stocks to buy for 2016 wasn't very long, as you may remember, and it had a particularly heavy tilt toward the precious metals sector. So far that has proven a much more profitable strategy than the "buy and hope" strategy most analysts were peddling at the start of the year.

My mantra has been "buy gold and save yourself."

Close to six months later, the gold price has gained 15.79%, yet every one of the gold ETFs I recommended to you has outstripped that gain. One has already doubled in price, and one is fast approaching another double.

If you followed along, you're sitting on a very nice profit. Congratulations.

That's worth an update and some new targets… 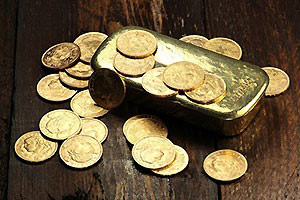 While the U.S. Federal Reserve and mainstream media keep telling us that the U.S. economy is healthy, the facts tell a different story. In the United States, trade and demand are weak while manufacturing is hovering just above recession levels. Globally the story is much worse – global trade is collapsing, global manufacturing is in recession, and global demand for goods and services is falling. In fact, global trade is at its second-lowest level since 1958 and is falling on both dollar and local currency terms. Eight years after the financial crisis, virtually all of the central banks are still engaging in crisis-era policies with little prospect of reviving economic growth.

Of course, when all these factors converge, gold goes up. (In case you missed my profit recommendations for the "Big Five" currencies, including gold, you can get those here.)

Gold (which China, a country that thinks generationally, is buying huge amounts of) keeps bouncing around, but it remains the only way for investors to save themselves from the incompetence and delusions of central bankers. Gold-related investments are long-term picks that can easily take more than one year to work out because gold is a generational play. However, we've been seeing consistent shorter-term gains in our gold stocks over the first six months of the year – particularly in our miners.

Here's How Our Gold Plays Are Looking Right Now

Our first gold double is Global X Gold Explorers ETF (NYSE Arca: GLDX), an ETF that holds a basket of about 20 mining companies, mostly based in Canada and Australia. GLDX has gained 107.86% in less than six months. It has paid a year-end dividend in four of the past five years and seems likely to do so again for 2016, given its performance. It charges a 0.65% management fee, which is reasonable. VanEck Vectors Junior Gold Miners ETF (NYSE Arca: GDXJ) is almost in double territory. GDXJ is much the same story but has more holdings (49 miners currently) and a more global focus. It charges a 0.56% fee and pays no dividend.

In the past I haven't typically recommended owning mining companies to bet on gold (if you want to own gold, own gold), but I reasoned that these gold miners are a very leveraged bet on a recovery in gold and are so out of favor that they are worth a shot. Further, I recommended exchange-traded funds (ETFs) rather than individual stocks to mitigate the individual operating issues associated with individual companies. So far these picks have worked out well and I continue to recommend them.

The other two gold recommendations I made are the Central Fund of Canada Ltd. (NYSEMKT: CEF) and the Sprott Physical Gold Trust ETV (NYSE Arca: PHYS). Both funds own both gold and silver and give you an opportunity to buy these precious metals at a discount to their spot price. Both are up by double digits.

What to Do with Your Profits

Often a good strategy when you've doubled your money is to sell half of the position. The idea is to virtually eliminate your risk, because all the capital you had at risk has been returned to you, and what's left at risk is pure profit. However, in this case, gold and gold securities are one of the only good places to put your money. I expect gold to shoot up to $4,000 or $5,000 an ounce over the next decade or two – so we still have a long way to go.

Of course, it's your call whether to sell now or keep holding, but the future looks bright.

Congratulations to all of you who are making money. Leave a comment here to let me know how you're playing gold.

I have about 6 ounces of gold. That's a sizeable portion of my total wealth. At age 65 I'm using gold as a hobby as well as a small refuge for funds that can get me further into a period of financial catastrophy than others could make it./

You have to always read between the lines. There is a reason several countries and Central Banks have been stock piling gold over the last 3 years or more.Investors have the wrong mentality thinking Gold is a Commodity. It isn't. It's always been a form of currency going back as far as the Romans.If you haven't read Michaels article about how several large Investment Banks have admitted and got caught manipulating the price of Gold and Silver to keep the prices low so Central Bankers and China particulary could stock pile as much as possible before it eventually takes off.… Read more »