"When in doubt, go for growth."

As you can see, I'm fond of investing anecdotes and aphorisms, because stories and often-repeated "sayings" are an easy way to convey a key lesson or to drive home an important message.

The message here: Don't let this Brexit-induced correction put you off your game. Be mindful of risk, and look for opportunities, and you'll be able to turn this Brexit wreck to your advantage.

And there are two sure-fire ways to do this…

And look for bargains.

Indeed, I've found one stock that achieves both goals.

It's a stock my Private Briefing subscribers and I know well – and like a lot, because it's treated us to peak gains of 387%.

But I want to tell everyone about this so they'll have the chance to participate in what's coming next.

And I want to do that this weekend, because the stock just dropped squarely into "bargain territory."

There are more profits directly head. Get ready to buy on Tuesday for a potential 66% gain in short order…

Connect with One of Private Briefing's Best "Friends"

The company in question is NXP Semiconductors NV (Nasdaq: NXPI), a pioneer in "near-field communications" (NFC) technology that was itself a 2006 spin-off from Koninklijke Philips Electronics NV (NYSE ADR: PHG).

That's the perfect example of why I'm such a big fan of spin-off plays.

When I originally recommended NXP back in May 2012, I said it was a play on the digital-payments revolution; the company had developed a semiconductor/software "platform" that turned smartphones into electronic wallets. But I also knew the company had other irons in the fire.

Indeed, when I first recommended the stock, it was trading at $23.40, and the Wall Street crowd said it could hit $30 in a year. But I told you it could go higher – much higher, in fact.

And that's exactly what happened.

One of the triggers was NXP's $11.8 billion buyout of Freescale Semiconductor Ltd. (NYSE: FSL) – a deal that was announced in early March 2015.

Interestingly, the buyout turned into a three-way windfall for Private Briefing subscribers.

As a result of the Freescale deal, NXP's shares gained more than 17% in one day to hit a new all-time high of $99.90 – and over the following three months zoomed as high as $114. The stock had already soared as much as 62% following the late October 2014 launch of Apple Pay, which we predicted would position NXP as one of the biggest beneficiaries of the new mobile-payments standard.

Windfall No. 2 was Freescale itself – which we had recommended in mid-April 2014. You cashed out of that stock with a profit of about 70%.

Windfall No. 3 was The Blackstone Group LP (NYSE: BX), the private-equity specialist that had gained as much as 72% (including dividends) after we recommended it back in July 2013. Blackstone was one of four private-equity firms that took Freescale private in a $17.6 billion leveraged buyout (LBO) back in 2006. Because of the interceding credit crisis, the LBO deal wasn't one of the better ones made. However, by hanging on – and not cashing out during the dour days of the Great Recession – Blackstone achieved break-even status on the original deal and received shares of NXP as part of the buyout.

NXP has skidded since then. The slowing industrial sector has affected that part of NXP's business. Likewise, the deceleration in auto sales (the Freescale deal made NXP the No. 1 supplier of chips to carmakers) has spooked investors.

Indeed, Bank of America/Merrill Lynch (NYSE: BAC) analysts have downgraded several chip companies, including NXP, which it shifted from "Buy" to "Neutral."

The firm shaved its fiscal-year 2017 and 2018 estimates for auto sales by 3% and 10%, respectively, which it said would hold down NXP shares. Additionally, the traditional third-quarter underperformance of semi stocks and the exit of the private-equity shareholders (who still held 10% of NXP's shares) would create an additional "near-term overhang" on the chip company's stock.

What they didn't say, however, is that NXP is just such a candidate.

And in a white-hot market.

This Market Is Long on Sizzle… and Steak

In a new report, International Data Corp. (IDC) said that the worldwide wearable-tech market soared a stunning 67.2% in the first quarter, as new devices, price cuts, and the widespread consumer adoption of smartwatches and health-tracking devices fueled growth.

To give you a little perspective, consider that the U.S. economy slowed from a 1.4% annual clip in the fourth quarter to 1.1% in this year's first quarter – and that was after the U.S. Commerce Department revised that first-quarter showing up from a previously reported 0.8%.

That shows you that the wearables market is scorching.

"The wearables market continues to mature and expand," Ramon Llamas, research manager for IDC's wearable-tech team, said of his firm's study. "The wearables that we see today are several steps ahead of what we saw when this market began, increasingly taking their cues from form, function, and fashion. That keeps them relevant."

As a player in this market – a supplier – NXP is key, too. 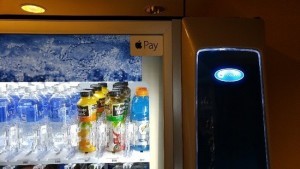 Apple Pay is just one of the digital-payment methods that will be fueling purchases made by wearable-tech devices in the years to come.

As the maker of the NFC chips for the Apple Inc. (Nasdaq: AAPL) iPhone and Apple Watch, NXP is the provider of key "enabling" technology. As we've been saying for several years, this is the core technology that empowers Apple Pay. With other payment systems coming to the fore, expect NXP to gain prominence in this field.

Indeed, the overall digital-payments market is going to soar: According to researcher Tractica, wearable devices did $3.1 billion in transactions in 2015 – but that's just the start. Forecasts call for wearable-driven transactions to zoom to $500 billion annually by the decade's end.

NXP is trading at $78 right now – three times our original recommendation price. But the high-water estimate for the stock is $130 – a potential gain of 66%. Future bouts of growth (such as happen regularly with these shares) could send the stock even higher.

A bargain price… plus torrid growth… in the face of a crisis that has lots of folks frozen in place.

We're going to look for other plays here, too. But let's start with NXP, and let's play it smart. Start with a fraction of your intended position and then add to it on pullbacks.

I'll be in touch with my Private Briefing readers to update them on this stock, along with other insights and opportunities. Click here to learn more about how I pick these stocks and deliver them to my readers every single day.