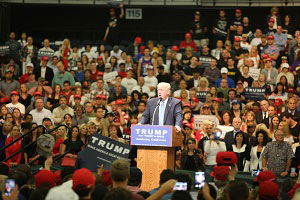 Donald Trump announces his plan to ban Muslims from entering the U.S., Dec. 8, 2015.

Specifically, these Empire State money-crunchers calculated the cost of the real estate mogul's proposal to oust 11 million undocumented migrants from the States while enacting a ban on all Muslims attempting to enter.

You Don't Have to Vote for Apocalyptic Meteor 2016: If you're disenchanted by the two presidential candidates you'll have this November, fear not – lack of love for Trump and Clinton has opened a door for an unexpected third candidate to shock the polls. Here's what we mean…

The findings were reported Wednesday morning by New York City Council Speaker Melissa Mark-Viverito, who just happens to be a Democrat and vocal Hillary Clinton supporter.

She didn't mince her words when delivering the data, sliding in as much anti-Trump rhetoric as she could:

"While Donald Trump could watch the ruin from high atop his tacky towers, his plans would have a devastating impact on real people, and would do great harm to the economy of our city," Mark-Viverito said, according to The New York Daily News Wednesday. "The closer we look, the more it becomes apparent that — shockingly — a con man and reality TV personality masquerading as a policymaker would drive New York's economy into a ditch."

The councilwoman went on to explain that tens of thousands of undocumented New Yorkers contribute around $793 million in state and local taxes each year. According to the New York City Council economists' estimates, deporting undocumented migrants from the Big Apple would eliminate 340,000 jobs — higher than the number of jobs lost there in the 2001 and 2008 recessions.

Another economic think tank attempted to crunch the numbers on Trump's deportation proposal as well….

The American Action Forum, a nonpartisan, center-right-leaning organization, released a study on May 5 stating that Trump's plan would cost the U.S. government an estimated $400 billion to $600 billion. The higher number in AAF's calculated range matches what the New York economists reported this week.

Trump refutes the AAF's findings, however.

Here's how he said the study got it wrong…

When asked about AAF's study on May 5, Trump said he thought the analysts had misunderstood his immigration policy. He told CNBC that he wanted people to come into the country if they came "through the system."

"I saw that report and they don't even have it right," Trump said. "We certainly don't want to shrink our economy."

While the Big Apple businessman hasn't released his own economic cost projections for his proposal, he is quick to point to a September 2015 Reuters poll to suggest he's only acting on the will of the American people.

Cleveland police are prepared to go "Full Metal Jacket" at the GOP convention on July 18.

And the city has an epic $50 million receipt to show it.