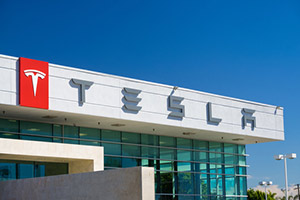 The Tesla Motors stock price is down 4% this week after mixed earnings and an announcement about Tesla's deal to buy SolarCity Corp. (Nasdaq: SCTY).

While investors are cautious about this week's news, we see this dip in the Tesla Motors stock price as an excellent buying opportunity.

Trending Now: Facebook stock is heading to $250 a share. And there's one reason we see shares bringing those massive returns in the next few years...

But before we get to our Tesla stock price outlook, here's what investors need to know about the Tesla Motors Inc. (Nasdaq: TSLA) earnings report...

While earnings and revenue missed expectations, Tesla showed big increases in production and deliveries. Those have been areas of concern for investors previously.

Here are the biggest numbers to know from the report:

Next Up: These Five Companies Could Take the IPO Market by Storm This Year

While many of the figures in the earnings report were bullish, the Tesla Motors stock price has been flat in morning trading today. So for the week, the TSLA stock price is still down roughly 4%.

At Money Morning we know quarterly earnings reports are important, but we take a much longer view on Tesla Motors stock. And that's why we see this Tesla Motors stock price dip as an excellent buying opportunity...

Why the Tesla Motors Stock Price Dip Is a Buying Opportunity

Tesla Motors stock price is usually volatile after earnings, so today's lack of action is a surprise. Options traders were pricing in an approximately 6% move ahead of the report.

Money Morning experts believe Tesla stock is one of the best long-term investments on the market. But they make it clear it's not for everyone. The TSLA stock price tends to be volatile, so it's best for long-term investors willing to take on some risk for rewards delivered in five to 10 years.

Money Morning Technical Trading Specialist D.R. Barton, bullish on TSLA stock, says it is "head and shoulders ahead in the electric car front."

Musk's vision and ability to create innovative products has thrust Tesla to the front of the electric vehicle market. Without question, many investors buy shares because of Musk himself.

Earlier this week, Fitz-Gerald reiterated that optimism, since what Musk's doing is "shaking up Detroit and rewriting the automobile industry whether executives are ready or not."

Dougherty & Co., noting Tesla's substantial lead in battery technology and powerhouse brand, reiterated its "Buy" rating with a $500 price target. That would be a gain of more than 122% from today's price.

Editor's Note: The Internet of Things will revolutionize the way we live. And five companies will be at the center of this $6 trillion revolution...